Another week and another update on my Disney Infinity collection and quest for power discs. My collection of series 1 discs is almost complete as Toys’R’Us releases it’s latest exclusive disc this afternoon, but firstly… 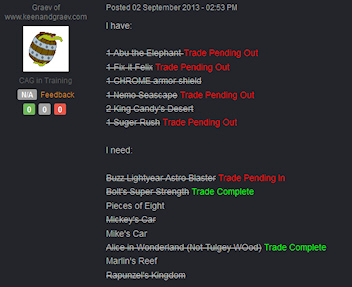 I don’t have a lot of faith in people. With all of the horrible crap you hear about going on in the world I would not be shocked to learn that somebody got scammed and taken for their tiny plastic discs. I threw caution to the wind, however, and began actively seeking out trades for my discs. What I’ve experienced so far is slightly shocking… Apparently people aren’t total assholes? This revelation threw me for a loop. I was promptly contacted by people after I posted my advert and asked to trade. I’ve made a total of 3 deals and the first batch just came in the other day. I opened the package and inside was exactly what we had agreed upon, which for some reason or another gave me a sense of curious apprehension.

My second package is on the way, according to a tracking number, and the third should be not too far off. Maybe I’m alone in thinking this but it’s just curiously odd. Nobody seemed uncertain or asked for references or for anybody to ship first. There was just an exchange of addresses and we all sent our stuff out. It makes me wonder if these people have a curiously high amount of faith in total strangers or if they just don’t care that much if somebody scams them out of their super awesome lenticular Buzz Lightyear Astro Blaster disc. Obviously I sent out all of my items immediately because I’m cool like that. Keen and I left our scamming days in The Realm, Diablo, and EQ way behind us. Hrmm… Perhaps he won’t appreciate me bringing that up.

Anyway, I just think it’s pretty cool how I was able to trade with these guys fairly and easy over the internet. It kind of gave me a nostalgic rush and brought back memories of all the crap I used to collect years ago. I think I still have my pokemon cards and Monsters in My Pocket around here somewhere. 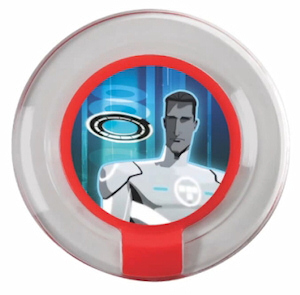 Journey Back to Toys’R’Us – Exclusive Discs and Frustration

The release of the second Toys’R’Us exclusive power disc is the only thing that would get me to slink back to that hell pit of misery and sorrow. Exclusive crap really bothers me. Actually, I think I might have posted about how exclusive pre-order DLC enrages me, but I digress. Keen and I traveled back hoping to find at least one pack but unfortunately they were sold out in the first three minutes to a bunch of old people. One lady had several dozen stacked in her arms. I mean, what the hell? 50% of those packs are going to be the same disc so the only reason to be buying that many is if you plan to resell them. It sucks for me, sure, since I wasn’t able to get one but what about the little kids showing up at noon for the trade event? If they were hoping to snag the new disc they are going to be really disappointed. I feel bad for them more so than guys like me. My store really dropped the ball on this one. I was lucky enough to get one pack at another store later on in the day.

This is one of the reasons why I really dislike not only exclusives but this kind of collectable. It gets people to go out and mass-buy all the items just to re-sell them for a premium. Also, the ability to scratch the packages and find out if a lenticular disc is inside easily allows people to buy up and hoard all the rares and ruin it for others. Of course this makes me a hypocrite since I did the same thing to an extent, but what else is there to do? You hope to get the rare disc but if some guy already went in there and snagged almost all of the rares then your chances of finding any for yourself drops incredibly unless you hunt for them as well. The whole thing is a frustrating level of BS but Keen tries to explain that it’s good business/economics/etc. Nobody cares, dude. At least not this guy.

So why are you putting up with this?

I really like the game and Disney. Collecting stuff is fun. I also might be slightly obsessive… maybe. I guess I get more enjoyment out of it than stress. I plan to continue collecting and trading discs. Although now I probably jinxed myself and some dude is going to send me pogs in the mail or something.