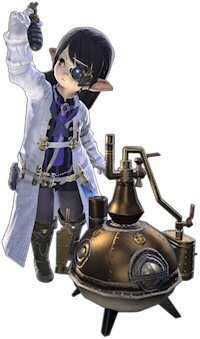 I’ve been putting some time into the crafting side of things lately. Not a whole lot of time, mind you, but enough to get my gathering professions (mining and botany) to level 20 and 14 and several trades (blacksmith, goldsmith, armor, leatherworker) to anywhere from 15-17. Initially my plan was to only do leatherworker but that didn’t last very long. Soon I came to a point where I needed various ingots so that’s when I hopped on over to do mining and blacksmith. Well, at least until I realized what I actually wanted to be doing was armor smithing, which luckily benefited already from being able to make leather. Then I hit another wall because OBVIOUSLY on goldsmiths can smelt tin ingots, so I had to pick that up as well, along with botany because there is a surprising amount of wood in armor. Yeah I don’t really understand that last one but whatever. I’m not sure if this heavy cross-profession reliance is meant to make YOU take almost every crafting or encourage you to work with other crafters. The latter wouldn’t be so bad except the current market prices for materials is just heinous. Even materials that can be bought off VENDORS are being sold above merchant price. I mean, who does that? Better question, who actually is dumb enough to pay that?

The crafting process itself is something that I kind of enjoy. I’m not sure how close it is to the FFXI system but it does look similar. You pull out your little workbench and tool and a little colored crystal floats in front of you. Admittedly all of my crafting knowledge is self taught mainly due to the fact that I don’t have the attention span to read a guide. From my understanding you get a set durability and you need to make enough progress to complete the item before it breaks. Along the way you can use abilities to boost the item’s quality which gives you a higher % chance that you will make a High Quality item. Depending on the current condition of the item you might get a small, medium, or substantial increase to the quality percent chance. Or none at all if you miss. The condition is represented by the crystal, but I’m not sure if you even need to focus on the crystal color because there is a text indicator that does the same thing of letting you know the condition. White = Normal, Reddish = Good (Or something like that, and Flashing Colors = Excellent. But like I said, you don’t even need to watch the crystal color so I’m not really sure why it is there.

As you level up you gain new abilities to help you craft. These require the crafter equivalent of mana to use and can be anything from waiting for a condition change, repairing durability, increasing your accuracy, etc. Lot’s of cool stuff to use but there also seem to be some useless things, or at least I can’t figure out their benefit. You can use some abilities cross-class just as you can with the battle classes. I believe you get your first cross-class ability at 15 and the next is at 20 or 25 and so on. Some of these are actually pretty good like the one you get from leatherworking. It cuts durability loss by 50% for the next 4 turns and is cheaper to use than the durability repair option which only really gets you enough durability back for 3 moves. Some others don’t seem as great but it might be that I haven’t found a good ability combination for them.

The RNG Demon and You

The whole process is mildly addictive and getting an unexpected high quality item is a small thrill, but there is something slightly odd about the whole process. Your first ability to increase item progress has a 90% success rate and the first ability to raise quality is something like 70%. I can understand that a 30% percent failure rate is fairly high but the sheet amount of failures on some of these moves is really vexing. I mean, what are the odds that something with a 90+% chance at success fails 3/4 attempts? An isolated incident may be one thing but this seems to constantly happen to me. It’s not just with crafting either. When gathering you get a wide variety of success rates based on your level and the level of the item you are trying to acquire. Oddly enough the failure rate for things that are even as high as 95% chance to acquire is shockingly high. Just earlier today I was chopping down wood at that rate and I’d fail at least 1/4th of the time. Not only that but my 15% chance at find a high quality item RARELY ever happened. It’s just weird that something with a 5% chance of happening seems to happen quite a deal more than something with a 15% chance. Could I just have REALLY bad luck? I suppose so, yeah. I’ve never really asked anybody else about their experience so I don’t know. Still, this RNG seems to be holding a grudge and these success/fail rates seem a little off.

My least favorite part about crafting would undoubtedly be the gathering side. It’s not like other MMOs where a random node pops up or whatever, which is good. There are certain locations that will always have the nodes, trees, bushes, or whatever you need. Usually they seem to be in a clump of four and you just rotate between them while they respawn. You’ll most likely see other people around you gathering from the same nodes, or nodes you can’t even see, but everybody seems to actually get their own nodes. Sounds good, right? Sure, except it takes. FOR. EV. ER. FOR.EVER. FOREVER!

Seriously, you will be running around in a circle and collecting stuff all day long and have not a lot to show for it level-wise. My mining is only level 20 but supposedly it gets infinitely worse than this later on. If you are lucky you will eventually hit a point where your brain kind of shuts down and your body just keeps the process going. You zone out into somewhat of a catatonic daze and your eyes glaze over. The only thing that will pull you out of this is the familiar “Do-do do-DOO do do DO do-doooo!” of leveling up.

Maybe? Like I said, I’m only in my high teens and the highest level items I can make are around level 25. What kind of makes you die a little on the inside is seeing that the same stuff you can slave away crafting is given out like candy via quest rewards. I guess yours has a chance of being better at HQ but I can’t image it would ever be worth going through the motions for as this stuff gets replaced all the time, especially when somebody can spend an afternoon doing Fates and go from 20 to 30 something. It is nice for crafting gear for lower level classes you might pick up, however, seeing as you can’t repeat any of these gear quests.

Unfortunately it seems that, like in most other MMOs nowadays, the real value of crafting professions will be (hopefully) seen at higher levels or even max level. If you can ever manage to get there, that is.

Hrmm… I guess it turns out this wasn’t so brief.