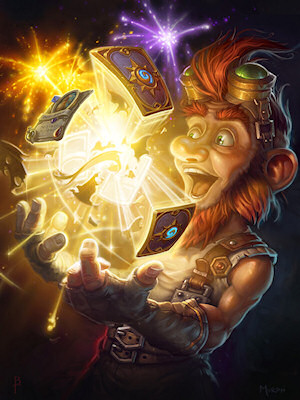 Heartstone is Blizzard’s digital card game and foray into the Free to Play market.

I was lucky enough to randomly receive a beta invite, and I’ve been playing for many hours over the last week or so.

Hearthstone has two great things going for it:

In typical Blizzard fashion, Hearthstone runs flawlessly, looks great, and wins over the imagination with awe-inspiring attention to detail in everything from the cards to field of play.Â  Appealing to the WoW fanboys and live streamers doesn’t hurt, either.

The game itself is fun.Â  Although a somewhat watered down version of Magic the Gathering, there’s enough depth to develop a deck and deploy a strategy.Â  Games are very quick, and all strategies tend to revolve around overwhelming your opponent with creatures.

Selling booster packs will make Blizzard a gazillion dollars.Â  Blizzard definitely captured the feel of opening a pack and discovering the cards by having players place the booster pack on the table and turn over the 5 cards you get one at a time.Â  You read that right: 5 cards.

Paying for booster packs will give an enormous advantage, exactly like it does in every TCG.Â  Making Hearthstone your hobby will be expensive, but if you’re a TCG junkie this one is well worth the investment.