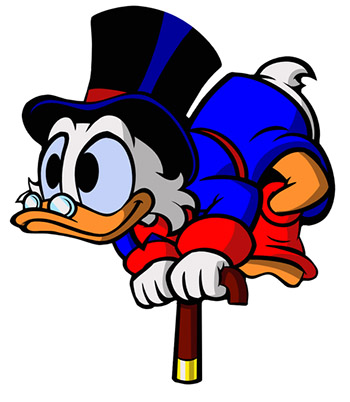 This game was one giant nostalgia rush. Not because I had ever played the original but because I grew up watching DuckTales. Actually, DuckTales: Treasure of the Lost Lamp is still one of my favorite movies.

So, yeah, it was an interesting experience for me having never played the original games. I’m not 100% sure if it’s a full on remake or just a re-imagining of the original game. From what I understand it uses the same level themes from the first game, with an additional final level, but I think the levels themselves might be different. You can choose easy, medium or hard but I never pick any difficulty that might actually make the game fun, so hard it is! I know that in some of the lower difficulties there are things like HP cakes and invulnerability coins but apparently not in Hard and beyond. Pffft, Invulnerability… Like I’d need that anyway.

I’m not going to summarize what DuckTales is because if you don’t already know then you are beyond saving at this point. The main plot of this adventure has Scrooge and his nephews tracking down various grand treasures across the world. It’s presented pretty fantastically with beautiful visuals and the voice work is from the original cast of the TV show for the most part.

After a brief tutorial level you are presented with a choice between one of 6 locations to go: Amazon, Transylvania, African Diamond Mine, Himalayas, and The Moon. I don’t think the order you complete them in has any relevance but after you beat the boss of each and obtain the treasure you unlock one final level.

The games mechanics are pretty simple. It’s a platforming game so you move around a level, collect money and items, jump on enemies, repeat. The jumping works just fine and for the most part the platforming works out well enough. Things get tricky, however, when you need to pogo jump. Scrooge must use his cane to bounce higher and to avoid damage from spikes. He also must pogo bounce onto enemies to take them out. This can be done in one of two ways with hard-pogo being either on or off. If it’s off then all you have to do is press the designated button while in the air to whip out your cane and bounce. I actually found that a very small percent of the time Scrooge didn’t pogo bounce after I had pressed and held the button. I’m not entirely sure why this is but it can really hit you at an unfortunate time and cost you your life. With hard-pogo on you have to press down + the corresponding button to perform the pogo move. It’s a lot trickier to do since it seems you actually have to press down BEFORE you hold the button but in the end it seems to work 100% of the time unless YOU screw it up. You might as well go hard-pogo ON since it’s more reliable and you MUST have it on for Extreme difficulty anyway.

The extreme difficulty is the one that I find the most fun. You essentially have to completed the game with only 2 extra lives (not counting any you might find along the way) and zero continues. If you die you lose ALL of your progress and have to start over. It’s pretty much how most older platform games used to be. They actually seemed to be using a lot of older game mechanics. I imagine they wanted to create as much of the original feeling from the first game as possible. For example, you find gems just by walking over certain areas of the screen. They just appear there. Like I said, I never played the original but this seems like the kind of thing that would have been in an older game.Â  Throughout the game I kept thinking things like, “Wow, it would be cool if Scrooge could do this!” or “Playing through this with a co-op partner would work really well” but I imagine that defeats the purpose of remastering an old classic.

I hope we get to see more DuckTales games in the future if this sells well enough. The Castle of Illusion remake is due out soon so that should be another fun Disney experience. Hopefully these are a sign of more good things to come.

DuckTales Remastered: 4.5 out of 5. Only a few things could have been better, and I wish it was longer.
Tags: Platformer, PS3, Wii U, Xbox 360