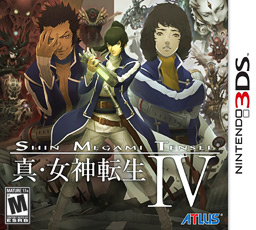 This game marks my first foray into the main MegaTen series. My prior experiences being only with Persona 3 (P3P) and Persona 4 Golden. I think I even blogged about the latter a while back. I heard that the main series was pretty different compared to the Persona offshoots and their time management aspects. Having really enjoyed P3p and P4G I was a little concerned that SMTIV might not do it for me, but after 10 or so hours I’m already hooked.

The game takes place in, what I can only assume to be, some kind of post-apocalyptic Japan. Things have pretty much reverted to a more feudal era with stuff like kings, castles, nobility, and of course Samurai, which play a pretty large role in things. Every year or so all young men are called to attend a gauntlet ceremony to see if they will be chosen to join the Samurai, etc. Obviously you as the protagonist gets inducted and the game goes from there. It’s a pretty interesting narrative so far and I have the feeling that I’m just scratching at the surface so far. I can already tell there is going to be a lot of philosophical thinking about good and evil. I’m usually more for the lighthearted kind of stories but it is still interesting so far. Plus, supposedly you get to make more choices down the road and depending on who you side with you get a different ending. I’m looking forward to seeing the extent of that.

Unlike Persona, where you can equip a persona and your party has an assigned demon persona, you recruit demons to join forces with you. It’s actually a lot more interesting than I originally thought and is sort of like Pokemon in a sense, except instead of fuzzy electric rats you collect obscene bile-spitting demon folk. To recruit them you merely strike up a conversation mid battle and try to persuade them to sign up. Sometimes they will ask you certain questions or make demands of you and depending on what you choose they will either join you, get pissed off, or run away. There seems to be quite a large element of randomness to it but each demon does seem to have a certain personality. I’d be thrilled if the random factor was a lot smaller but it is still a really interesting system. Once you actually recruit the demons you get to use them in combat, level them up, get skills from them, and even fuse them to create new and powerful demons.Â  It’s cool stuff.

The combat seems pretty similar to the two Persona games I’ve played with only a few differences. Mostly the same demons and abilities exist so I was already a leg up on understanding stuff. In combat you and your demons each get a move to do something and then your enemy gets to go. You can gain bonus actions if you crit or hit an emeny with its weakness and similarly lose an action if you miss or get hit with your weakness. You can essentially clear out all the foes before they even get a turn to react if you plan it right. That may make it seem like the game is pretty easy but believe me… It isn’t. Enemy demons can do a crap-ton of damage to you and it’s pretty much guaranteed that you will die. I actually died during the tutorial.Â  It can get pretty rough. Things do even out a little bit once you have a decent roster and equipment but things can still turn bad for you incredibly fast. Luckily death isn’t exactly a game over. When you die you can bribe Charon, you know — the boatman,Â  to get sent back. If you have playcoins you can use those and if not you have to pay a hefty amount. If you can’t afford it then he will put it on your tab. Unfortunately if you die with debt on you then it’s game over. So save often.

I’m not exactly sure how longer the game is but it feels like I still have quite a dang bit. It’s actually got my interested in possible tracking down and playing SMTIII Nocturne, which I hear is also pretty great. SMTIV may not be for everybody, though. It is, like I mentioned, pretty difficult. Also the combat takes place in more of a first person view so you only see the enemy sprites and not your own units. Anyone who has played oldschool RPGs or dungeon crawlers probably knows what I’m talking about, but the aesthetic does turn a lot of people off. I’d say it is totally worth checking out if you own a 3DS. Especially since if you register the game along with Fire Emblem: Awakening (which is also a great game) before 8/31 you can get a $30 eShop card which can be used on either your 3DS or Wii U. Something to think about, at least.