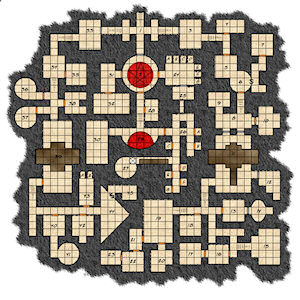 What if dungeons in MMOs were randomly generated weekly or monthly?

Random content is a common theme during a Keen and Graev game design gab session.Â  We’ve been tossing around the idea of randomly generated one-time boss spawns for quite some time.Â  I think Onyxia is a great example.Â  There’s this dragon with a really rich story, but she’s farmed over and over.Â  Logistically and story-wise it doesn’t make a lot of sense to have a boss like Onyxia be a one-time-kill.Â  We then thought about having random one-off boss lairs spawn up around the world, and while that would be awesome to have a new boss come crashing in unannounced to a capital city or a zone, or suddenly a cave appears in a mountain housing a new dragon, it again becomes a logistics issue.

So we went back to the drawing board and came up with a new idea: Random dungeons.Â  What if dungeons could be randomly generated and introduced to the game at regular intervals? I’m thinking of open dungeons like Guk with lots of tunnels — something a developer doesn’t have to spend a ton of hours fine-tuning because the dungeon will be available one week then gone the next.Â  Instanced dungeons are technically a lot harder because the entire experience is scripted, but a traditional dungeon that players share might be much easier.Â Â  Maybe once a month a new dungeon comes out and randomly rotates old ones out so you never know when a dungeon will disappear.

This is all part of this ‘dynamic content’ and ‘group content’ kick we’re on lately.Â  There needs to be a way for content to be fresh.Â  I’m itching to play something unscripted and unfamiliar, but that’s an experience I can’t seem to find readily available in modern MMOs.Â  What are your thoughts? Can randomly generated, temporary content be a thing?