When I got home from work yesterday, Graev shouted to me “Hey, did you see this ex-WoW Dev’s article?Â  He’s saying the same thing you’ve been saying for years!”Â  I was skeptical at first.Â  Rarely do the things I preach get repeated by anyone in a serious role and able to produce a game.Â Â  I was pleasantly (and annoyingly) surprised to see that Mark Kern wrote an article highlighting essentially a summary of everything I have said over the last few years, even the last few weeks (My EQ Next Wishlist anyone?).Â  Seriously.Â  Everything from mudflation, accessibility, the journey vs. the destination, end-game… you name it, I shouted it from the rooftops, and he wrote it.Â 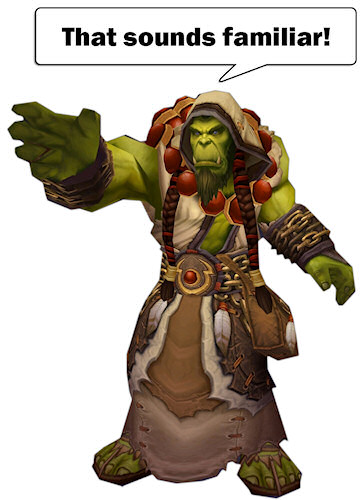 As content gets easier in order to appeal to a wider market, it at some point also pushes that market away. We feel bored by the same formula over and over. We never explore the world, having been indoctrinated to just follow a laundry list of tasks. There is no thinking, and not much choice, as the ideal path is spoon fed to you in a linear fashion (ironic how open world MMOs have become linear quest fests). It may be great for relaxing and having a fun couple hours of gameplay, but it doesnâ€™t last. No wonder we have such a huge crowd of jaded and bored MMO players.

I agree.Â  I’ve said it a million times that having to work for something makes every win, even something minor, feel like it was earned.Â  MMOs should feel like an investment.Â  I don’t want to drink from a fire hose, nor do I want to have to follow a check list of tasks in order to proceed.Â  Quests should be an adventure, not a chore, and should take weeks, not minutes, to complete. Â  Let me struggle to survive, fight to gain ground, and bask in the glory of victory because I did more than talk to the right NPC.Â  Just yesterday Graev wrote that he doesn’t want to be punished for grouping.Â  I’d like to go one step further and propose that players actually benefit from grouping.

Itâ€™s not the end game that we should be worried about, its the journey. An MMO should be savored, a lifetime of experiences contained within a single, beautifully crafted world. The moment to moment gameplay should be its own reward. You should feel like you could live your whole life there, not by having infinite quests, but by having a living world that makes you feel good just for being in it and experiencing all it has to offer at your own pace.

One of the best lines I’ve ever written was in a recent blog post, so I’m going to say it again: I need to get the feeling that Iâ€™m simply too small to matter in the grand scheme of things, and no matter how hard anyone else tries they need to appear insignificant too.Â  I want [the world] to always be the center of attention, not Bob the Gnome and his guild of 200 sycophants.Â  I want to be overwhelmed.Â  I want to be scared.Â  I want [the world] to be so grand in scope that I canâ€™t possibly comprehend the breadth of whatâ€™s out there.

Just so summarize my thoughts (and six years of blogging):

I mentioned right up front that I was both pleasantly and annoyling surprised.Â  I’m annoyed because I hate seeing these types of articles used by developers just to market their games and try to grab the attention of a demographic desperate for anyone to say the right things.Â  I hope Mark Kern truly believes these things as I passionately do, but I’m skeptical that a F2P MMOFPS can provide the solution.Â  F2P inherently brings with it mechanics that are polar opposites of just about everything above.Â  Regardless, I’ll continue to believe these things, write these things, and one day (I pray) see them enacted again.