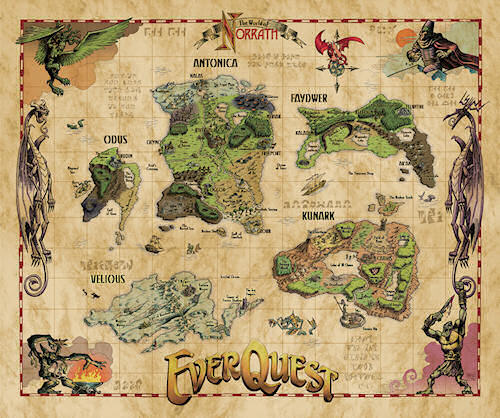 Back in 2009 I wrote a a series of articles about what MMORPGs have lost over time.Â  You’re familiar with the topic; I’ve written about it 100 times since.Â  MMOs are losing, or have lost, all sense of ‘world’. Even if things never quite get back to the way they used to be, at least I still have my memories.Â  This goes back to my EQ Next wishlist from last week. If EQ Next can get even half of this right, I’ll be happy.

I’ve recounted this story to many of you over the years, but here it is again in all its glory.

This is My EQ Story.

It was somewhere near the third day of EverQuest’s launch.Â  I was playing a Barbarian Warrior and getting my feet wet for the first time killing goblins. Yes, it took me that long to find my way out of the city and muster up the courage to fight past the wolves and leave the torchlight and safety of the guards.Â  I came across a larger spawn of goblins, and found others hunting nearby.Â  It was then that I received my first group invite and proceeded to kill goblins for over an hour.Â  At the end of our hunt one of the other Barbarian Warriors in the group announced that he had a friend who was making the trip to Freeport.Â  â€œWhatâ€™s Freeport?â€, I remember asking him.Â  He then went on to tell me that it was across the continent and one of the cities where Humans dwell.Â  â€œThe hunting is much better thereâ€, he said.Â  That sounded great to me.Â  I had spent a couple days now killing things in the snowy lands of Halas and I was ready to move on.Â  â€œWeâ€™ll set out in 20 minutes.Â  Make sure you have time to make the trip because itâ€™s a long oneâ€.

This trip across Antonica was the single most memorable experience I have ever, ever, had in a MMORPG.Â  We began our trip by following an icy ridge to a cave.Â  There were no maps at the time, and we were following someone who had only made the trip once before.Â  We made our way through a dungeon that actually acted as a passageway between regions.Â  â€œIf you get attacked, do not stop running!â€, was one of the scariest things I had ever heard.Â  Sure enough, we were attacked and all of us were frantically running for the zone line.Â  Thirty minutes later we were making our way down the coast of a river, and in the distance we could discern this great winged beastâ€¦ â€œGRIFFON!â€, they shouted.Â  What a griffon was I knew not, but my heart began to pound furious and my fingers trembled over the arrows keys.Â  We ran as quickly as we could to the nearest barn in the plains of the Karanas.Â  â€œWeâ€™ll hide in here until morningâ€.Â  And there we sat.Â  Why?Â  I donâ€™t know reallyâ€¦ it wouldnâ€™t have stopped the aggro from the Griffon and we would have certainly been dead since we were under level 8.Â  We hid until daylight nonetheless because at the very least it was actually difficult to see at night.

During this trip we saw several sights.Â  We stopped off in every outpost and town so that we could to let the adrenaline rush fade.Â  We visited with people we came in contact with and actually picked up more travelers along the way who wanted to make the trip in a group.Â  Seeing different races for the first time was a real treat.Â  The first time I saw a Halfling in Rivervale I couldnâ€™t believe my eyes that they were in such abundance here.Â  This was their little corner of the world and I was out of place.Â  The little Halflings crowded around us, gave us buffs, and even traded us turnips or something (I have no idea why) â€“ we were just as neat to them as they were to us.Â Â  We eventually made it to the gates of Freeport — a glorious and welcome sight – where a whole new, unique, set of experiences awaited me.

That’s my EverQuest — no, my MMO story — that I will always remember.Â  What’s yours?