I wanted to write about this game like a week ago but our copies were in a state of shipping purgatory or something and didn’t manage to get here until quite late. Since then both Keen and I have been glued to our 3DS screens and doing our damnedest to shake the yolk of oppression placed on us by our Raccoon overlord, Tom Nook, all while juggling the new responsibilities that come with being Mayor. Most people have probably played or at the very least heard of Animal Crossing so I’m just going to go into the game elements that are new and appealing to me. 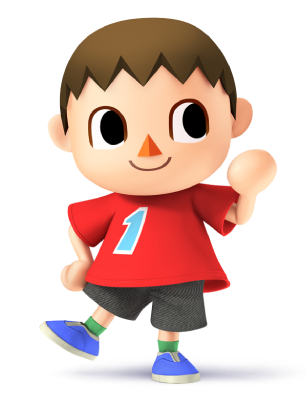 The new housing options are a much welcomed addition to the series. Mr. Nook takes a slight step back in this installment and deals only in real estate, but make no mistake, he will gladly shoulder you with crippling amounts of debt every time you want to upgrade your house. Now you can also buy different additions to the outside of your house. New doors, fencing, roofing, etc. A regular item store still exists and is run by Nook’s kids, Timmy and Tommy, so the whole Nook clan will be able to meet your housing needs.

Making designs for clothing has never really been chief among my Animal Crossing interests but for some reason I’ve caught the bug in New Leaf. You can make some pretty swanky stuff with the new pro-design options that let you have independent designs on the front, back, and sleeves. I’ve been working on a line of Adventure Time clothing featuring Finn and Jake. Pants are another neat addition to the clothing aspect of the game. Or skirts, if that’s your thing. You get a lot more options now to make your villager quite stylish.

I’ve just begun to dig into my new Mayoral duties , having only recently reached 100% approval rating. Keen is stuck somewhere around 50% because everybody thinks he’s a asshole or something. It’s totally not because I’ve been secretly burying my town’s garbage in his town. Anywho… As mayor you get to do some cool stuff like pass ordinances that make your town more beautiful or richer and start public works projects to build new town features like bridges and fountains. These things may sound pretty awesome, and they really are, but you are going to have to foot the bill for pretty much all of it. Ordinances cost 20K bells (money) to enact and public works projects can range anywhere from tens to hundreds of thousands. To help offset the cost they put donation boxes by the construction site but so far it seems like my town consists mainly of tight-wads with no sense of civic responsibility. It is a little odd how you are made Mayor as soon as you get off the train and essentially tasked with paying for everything. It’s more like indentured servitude or something. There’s some kind of serious discrimination going on here.

When it gets too stressful and I need to get away from it all I hit the beach to do some fishing, which has been a favorite pastime of mine since the first Animal Crossing game. There is something about it that I find relaxing. Not only that but you can make a boatload of bells selling fish or donate them to the town museum which is also highly satisfying. One of the coolest things I’ve seen so far has to be the sharks. I kind of lost it the first time I saw a fin sticking out of the surf and have been obsessed with catching them ever since.

I’m still in the early days of my village so new stuff is still happening each day and I’m very excited to see what else is in store for my village. Now if you’ll excuse me, I need to find some way to tax the hell out of my residents.