Soul Sacrifice is a very fascinating game. It’s based on Arthurian Legend, though the names have been changed in the NA release, and the main premise of the game revolves around saving, sacrificing and when it’s important to do one over the other. 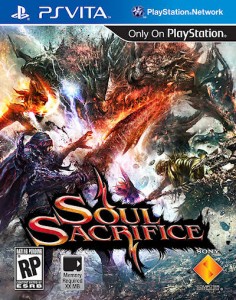 You are thrust into the role of a prisoner being held captive by Magusar, an evil sorcerer. He has been blessed (or cursed) with immortality and has to sacrifice people in order to maintain it. One day you happen upon a living journal in the cell next to you. He’s a wise-cracking english fellow by the name of Librom and he tells you within him are the memories of a nameless sorcerer. By reading through and reliving these past experiences, you can learn magic and possibly use your new found powers to defeat Magusar and escape. It’s an interesting tale for sure, and through-out the memories contained in Librom you will learn the secrets behind Magusar and the nameless sorcerer who he once called friend. Well I liked it, at least. Some people just show up for the cool spells, bosses and online play.

I’m not sure how I’d classify Soul Sacrifice. Some people say it’s like Monster Hunter while others swear up and down that it isn’t. One thing is for sure, however, and that is that it is NOT a Souls game in the same vein as Demon’s Souls or Dark Souls. A lot of people seem to make that assumption.Â  I would actually have to join the camp that says it’s like Monster Hunter, but only somewhat. I’ll stick my foot in that camp but that’s about it. You essentially undertake missions that want you to kill certain kinds of monsters or one larger monster archfiend. You can equip different offerings, or spells, along with carving sigils into your right arm that augment your abilities. Every time you kill a creature you get the option of saving or sacrificing it, which confers health and Holy experience or restores your spell count and gives Magic experience respectively.

There are actually several different ways you can specialize your character. A lot of people go pure magic and do insane damage, but die in one to two hits — Your basic glass cannon. Others, like myself, take a more supportive role by doing pure holy and gaining tons of HP and using support spells like healing, taunts, etc. Or you can just go neutral and take some of both. Then there are different spell types to work with. Melee spells that create weapons or turn your arm into a giant fist, thrown spells that shoot different objects, summons that call forth powerful immobile golems, shield spells that block damage and counter certain attacks, etc. You get six slots and can use whatever you want. Each spell has a certain number of uses and requires additional sacrifices mid-quest to replenish. You can upgrade these to more powerful versions and increase the effect and spell count.

The feature that most people are likely interested in would be the online play. You, and three others, can play any of the Avalon Quests together and take down different archfiends to farm certain offerings or soul pieces. It’s a lot of fun when you can get some competent people to play with, preferably the ones who won’t sacrifice your ass when you die. Oh, right, you can do that by the way. When a teammate dies you have the option of either saving them, and giving them half of your health, or sacrificing them for a big burst of damage against the boss. It’s beneficial to do both, and even when sacrificed you still get rewards including a nice martyr bonus. You really have to weigh the pros and cons of each situation or at the very least listen to whether or not the guy wants to be revived or not.

One of the most fascinating aspects of the game are the Black Rites. During a quest you can sacrifice part of your body for an extremely powerful spell effect. Sacrifice your skin for a burst of damage, but get your defense cut in half. Offer your eye to damage and paralyze a boss but in return your vision gets extremely narrows. Or just rip out your heart and turn it into a massive sword and hurl it the guy, but you will be constantly bleeding out. It’s really fascinating stuff but I wish they had gone a step further with it. Overall there is a feeling in the game that there are no real consequences for your actions. If you save somebody or sacrifice them or, like I said earlier, rip out your eye then you can just use Lacrima — essentially white-out — to erase your choice and completely void what you just did. It somewhat cheapens things when you can just undo them if you don’t like the results. I’d love to see more impactful sacrifices in a sequel.

It’s a very fun and enjoyable game. Maybe not the system seller that the Vita needs, but worthwhile all the same. Personally, I wouldn’t give my arm to play this game but I would give $39.99.