I have very strong opinions about guilds, and tonight I need to offload a few of them.Â  Guilds are a close association of people with the same goal.Â  I have always believed very strongly that a guild should resemble a family of people who care about each others well-being in and beyond the game. 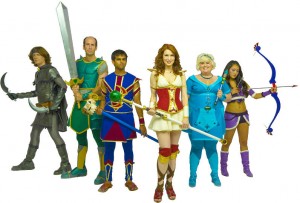 Guilds are not the primary entity — that’s supposed to be the player!Â Â Guilds shouldn’t be mandatory, but if I don’t belong to one then chances are I can’t do anything, let alone see end-game content.Â  Content is no longer designed first an foremost for the player, or better yet the entire server community; content is being designed for a close-knit exclusive groups of players who act more like a military team than a group of friends.

I feel like players these days care more about what the guild can do for them than what they can do for the guild and its members.Â Â  I have witnessed literally dozens of people leaving many different guilds because they can ‘get ahead’ somewhere else.Â  While some of that can totally be blamed on horrible people, if the game is designed for players to need a guild to advance ahead then it becomes harder and harder to blame the individual for conforming to the game’s design.

I would love to see MMO devs de-emphasize guilds and allow them to become social constructs once again instead of being determinants of gameplay.Â  Let players belong to a guild with their friends, a group that plays at a time best for them, is fun to hang out with, and isn’t necessarily the best.Â  Let there not even be a way of saying which guild is the ‘best’. Let people be apart of guilds that best match their play styles and their goals, but have the gameplay and content not even be a factor. Guilds should be the group you want to be tagged with, not the group that’s going to get you ahead.