I love when I’m actually playing games.Â  I feel like I can truly blog about what’s going on with my characters instead of struggling to find something to comment on.Â  EverQuest Project 1999 has been my focus this past week.Â  A few members of the KGC Guild decided we wanted to venture back to the lands of Norrath and see how far we could progress before a new game comes out and sweeps us away.

We made a nice group: Paladin tank (me), Enchanter, Cleric, Necro, and Druid.Â  We’re still missing one, but it’s not hard to pick up a DPS class.Â  Our little group began by adventuring in Crushbone.Â  We slaughtered orcs for days, camping everything from Centurions at the entrance to the Trainer on the plateau.Â  We even pulled Legionnaires when a high level Druid was nice enough to buff us. 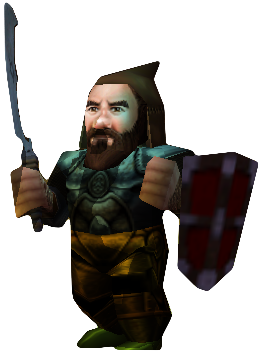 When we reached level 20 we went to Unrest. Oh the memories I have of that wretched mansion.Â  Many were rekindled as we pulled mobs and were barked at for taking a mob close to a room another group was camping.Â  That sparked a pulling war to see who would hog the most mobs in the mansion.

Now we’re in East Commonlands buyingÂ  things to raise our gear to a point where we can devote our entire play sessions toward finding camps out in the middle of nowhere and gaining fast levels.Â  We’re contemplating Aviaks in the Karanas, or something in High Hold Keep. Oh to have options!

Pulling is a mechanic I have missed most.Â  I love sitting in a location and setting up a camp.Â  I like hunkering down and killing monsters instead of constantly being on the move always running, always ‘progressing’ down a linear path.Â  I forgot how good it feels to just take in a zone for all it has to offer and to become so familiar that when the time comes to move on you almost … miss the zone in a weird way like you’re leaving your home.

More adventures hopefully await our little band of adventurers.Â  I’d love to get into the higher level dungeons that I remember from Kunark, camp for items to make our characters better, and dare I say it even enter the Planes and do Velious content when they release that expansion.