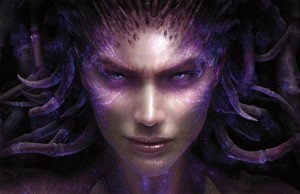 I knew Heart of the Swarm was coming out relatively soon, but a week ago I realized that HotS was actually coming out in a matter of weeks.  Now the long-awaited StarCraft 2 expansion is only 10 days away, and my excitement is growing.  I might be one of the few people looking forward to playing the campaign more than the multiplayer.

Back in the days of the original StarCraft and subsequent Brood Wars expansion, my skills weren’t bad.  I actually won plenty more than I lost, but now’days I get schooled when I try to play vs. other people.  When SC2 launched, and I jumped into the multiplayer thinking I’d be decent, I somehow managed to make my way into the Diamond League.  Not bad, but after a while I barely won a game.  I think it has a lot to do with what has transcended a hobby or even a game and become a culture, a sport, and dare I say it an art.  Some people really do watch Day9 to learn how to play rather than for enjoyment like I do, and those people practice and improve.  I never had the patience.

Then there’s the custom game scene, which I think as a total failure on Blizzard’s part.  Battle.net 2.0, in theory, works great.  Originally I thought quite highly of it, but that’s partially because I expected them to do great things with it instead of staying mostly stagnant.  The custom games haven’t taken off or become as addictive or interesting as they were in SC1 and WC3.  There’s something to be said for the previous custom map deployment — crude, but effective.

Maybe I’m alone, but I thought the SC2 campaign was a lot of fun.  I enjoyed the story, despite what Blizzard did to Kerrigan.  The campaign for Heart of the Swarm is actually my only reason for deciding to get the game.  I’m going to play through the SC2 campaign again real quick for a refresher.

Anyone else picking up SC2 HotS?  I’m curious to know if any of you are like me and prefer the campaign over the multiplayer.