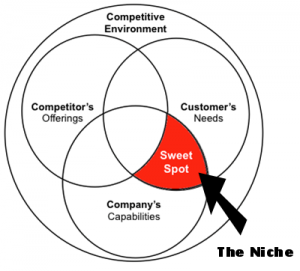 I believe the ideal future of MMOs can be found in the sweet spot.Â  What’s the sweet spot?Â  Check out the nifty graphic on the right.Â  The sweet spot is the niche of the niche; it’s the space where a developer can target a market of players where only that developer is able to meet the needs and wants of those players.

Consider Camelot Unchained.Â  Mark Jacobs wants to make a RvR game for RvR enthusiasts.Â  There won’t be any PvE, levels, or loot drops.Â  He wants risks to be taken and tough choices to be made.Â  Mark has openly said he knows CU won’t appeal to everyone, and he wants to make the best game for the specific group of people interested in, and passionate about RvR.

One of the most important aspects of targeting the right competitive environment is avoiding your competitor’s offerings.Â  Look how easy it is to go fall into a position where you still meet what the customer wants, but fail to capitalize on what you do well.Â  Rift is a great example: Trion made a good game that met the needs of a segment of players and fell within their capabilities, but they went for a space in the competitive environment where several other developers were already positioned.

Why not operate in an area where you dominate?Â  Why not find a group of players who are passionate about your game (your love group) and who will want to go out and recruit others to your space?Â  Cater to the right crowd, and if at all possible cater to the right niche crowd, and you won’t be competing for their attention.

This is the space where the most innovation, risk-taking, and progression will take place for MMOs — no coincidence that in 1999-2003 developers were all operating within their own sweet spot.Â  McMMo developers these days have to make way too many concessions, appease way too many people, and worry way too much about meeting some magical ROI figure for some guy in a suit who has never even played the game.

I think the sweet spot is where we find the passionate developers who simply love making the best game possible for the right group of people.Â  In the future, I want to play in a MMO industry with plenty of sweet spot options.Â  Don’t you?