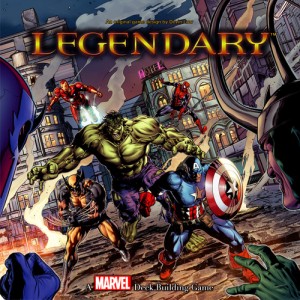 Have you ever played a deck building game?Â  We hadn’t until we picked up Legendary, and we like it so much we want to share it with you.Â  Deck building games are all about acquiring cards from common pool so that you can strengthen your own personal deck.Â  They come in many different themes, each with their own unique rules.Â  Legendary is set in the Marvel Universe, and it’s all about recruiting heroes to join your deck to help you defeat whichever evil mastermind is trying to take over the city.

The flow of the game is quite simple.Â  First, players select which heroes (sometimes randomly chosen) they want to use during the game and place them into a common hero deck.Â  Then you choose which evil mastermind and villains you want to face off against, and randomly choose what scheme that evil mastermind is trying to pull off.Â  During one of our first games, Loki was trying to destroy the city by opening chaos portals.

Once your heroes and villains are chosen, the goal is to ‘recruit’ hero cards into your deck.Â  When you recruit a hero it goes into your discard pile.Â  Once you’ve worked through your draw pile (full of shield agents and operatives early on) you then shuffle your discard pile into your new draw pile, giving you a stronger deck every time you cycle through a deck — thus you have ‘built’ a deck.Â  With your deck you take turns recruiting heroes, fighting villains, and ultimately getting strong enough to attack the mastermind.Â  If you fail to take out the mastermind before he hatches his plan, you lose.

There’s a bit of strategy that can go into building a deck.Â  Certain cards have better synergy with others.Â  For example, some cards will cause you to gain wounds (usually some annoying henchman).Â  Normally wound cards should be avoided because when drawn they take the place of a card that actually does something.Â  However, if you have Hulk (who you won’t like when he gets angry) he’ll benefit from wounds and … smash.Â  Looking at the heroes you have and what their special abilities do is extremely important.Â  We actually lost a game when we didn’t really work together on who would go after building what kind of deck.Â  That brings up a good point — Legendary is a great cooperative experience, with only a score at the end to determine which player technically did the best.

Setup can take a while, and it certainly doesn’t help that they ship the game with the cards unorganized. We split ours up with individual baggies, and used dividers to help us keep track.Â  Once you have a system, setting up for a new game might take 10 minutes.Â  Playing through a whole campaign (1-5 players) can easily take 40 minutes.

We really enjoy the moderate complexity and depth of the campaigns.Â  We like working together to take out villains, and how each campaign feels different when you randomly choose heroes and villains (lots of replayability).Â  Legendary is good enough that we’re now looking for other deck building games to enjoy. We welcome any suggestions!