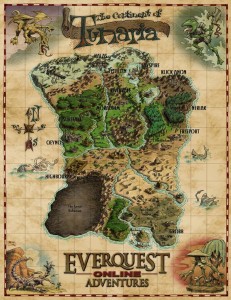 SOE takes a lot of crap from the MMO community.Â  They’ve made some huge, epic, mistakes in the past.Â  I’m not entirely convinced their emphasis on “F2P” is altogether sane, and I’m already fearing for EverQuest 3 / EverQuest Next.Â  More on that in a second, though.Â  That said, they’ve done a ton of great things for us as well.

John Smedley has been shouting to just about anyone who will listen how SOE helped create this rut when they introduced EQ.Â  Although he sounds a bit odd doing it, he’s totally right.Â  SOE did change things forever with the original EverQuest and the state of games today has been largely influenced by them.

I’ve been brainstorming with my friends to find a game we can all play together.Â  We want something that isn’t a themepark, something older with a lot of content, and perhaps something that won’t cost us a lot of money.Â Â  Interestingly enough, 4/6 games we identified were SOE games.Â  Chances are, we’ll be playing one.

I’m worried about Smedley’s ideas that F2P games are the end-all be-all.

“Free-to-play is just too good of an idea,” […] “The idea is just so simple. It democratizes and capitalizes, makes true capitalism out of the MMO gaming space.” -Smedley

I’m just not seeing your vision, John.Â  That sounds like the type of business talk that’s killing MMORPG’s.Â  I’m worried that EQ3 will have a ridiculous cash shop and be some F2P model.Â  Actually, I -know- that EverQuest 3 will be F2P.Â  I’m praying that SOE can pull through for me and once again innovate or revolutionize the MMO space.Â  They did it once, they still have many properties actively engaging players like myself, and all I can do is pray for the future to be worth the wait.Â  I can’t fall into a negative tailspin and think how there hasn’t been a single quality-driven F2P game.Â  They all compete on price, and once they all hit zero there’s no where else to go.