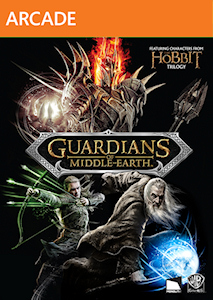 We played the trial for Guardians of Middle-earth today.Â  GOME is a digital download game you’ll find on XBOX Live or Playstation Network.Â  Gameplay is essentially DotA-esque MOBA, which we haven’t experienced on the console until now.

The controls are pulled off surprisingly well.Â  Movement is done with the left analog stick, and a circular aiming ring is controlled with the right.Â  Right trigger initiates an attack, and using the YXAB buttons activate the typical QWER abilities.Â  Controls are fluid, comfortable, and really well adapted.Â  The biggest downside to the controls is map awareness — there’s no way to look or move around which means you have to look at the minimap for any idea of what’s going on.

Heroes and abilities are also very well done.Â  We liked the selection of characters from Tolkien lore that aren’t usually brought up in LOTR games.Â  The menu system and options for custimizing characters are also nice with belts and gems and upgrades.

GOME is really generic, though.Â  The map lacks inspiration, and there are no items to purchase.Â  You get to allocate creep upgrades which are neat because it lets you send our different creeps for strategic use, but for the most part it ultimately just about pushing lanes with a lot less depth than a game like DOTA 2.Â  Despite being generic and lacking depth, this is actually a really good job for a console game.

Where the game fails, however, is price.Â  Their biggest competition is FREE!Â  Guardians of Middle-earth has a $15 price tag (which is fine by itself) but then proceeds to sell things like a season pass.Â  The Season Pass adds four characters and access to a special game mode when they come out.Â  It’s like DLC, basically.Â  GOME is fun, but is it $15 plus DLC fun?

XBOX Live has a really good trial worth checking out.Â  We both enjoy the game, but probably won’t invest the $15.