We love all things Skylanders!Â  Skylanders: Giants came out recently, and already there are more games in the works.Â Â  Activision released Skylanders: Cloud Patrol earlier this year, and we found it to be a decent game for the iOS platform.Â  However, it lacked that special connection to the physical toys/figures that the other games enjoy — Even Skylanders: Spyro’s Adventure on the 3DS had its own start pack and allowed players to utilize their collectibles.

That’s about to change, though, with Skylanders: Battlegrounds and Skylanders: Lost Islands.Â  These new iOS games will feature an optional bluetooth portal, and allow players to use their figures from all the previous games.Â  Not only does this increase the desirability of the iOS games, it introduces something quite unique to the iOS gaming market.Â  We haven’t played any other games developed solely for iOS devices that come with peripherals.Â  This could be the first of many entries into this type of dual market, and could very well cause several other popular iOS franchises to do the same. This may even be the beginning of controllers for mobile gaming. 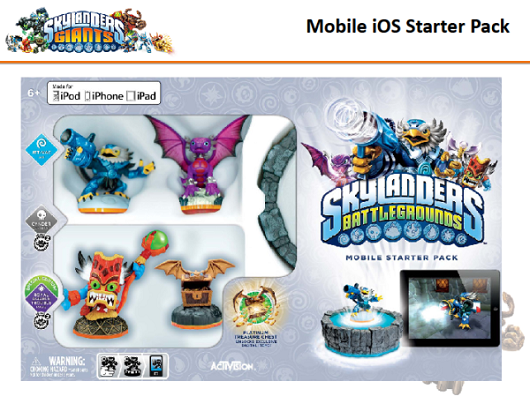 Skylanders: Battlegrounds will be an arena type fighting game.Â  The player can swap figures with the portal for free, or pay an in-game currency to select characters on-screen.Â  Clearly it’s better to have the portal.Â  The goal of the game will be to fight lots of enemies.Â  Activision has said that the graphics should be close to the Xbox 360 on an iPad.

Skylanders: Lost Islands will be one of those social multiplayer time-waster games.Â  Manage resources, build structures, and earn in-game currency to do it all faster.Â  These games are usually fun at the start, but often require a large investment to actually stay fun and not become a set of daily chores.

Despite being yet another investment ($49.99 for the starter pack and $5-7 for Battlegrounds),Â  it will be hard to resist more Skylanders.