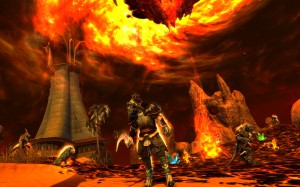 When I think of a themepark that represents the epitome of a quest-grind anti-dynamic world, I think of Rift.Â Â  Leveling from 1-46’ish (I never hit 50), I never once felt like I was doing anything dynamic.Â  Trion and other developers are continually pushing this idea that content like Rift’s zone invasions are dynamic, but I disagree so strongly that I felt the need to write a blog post; so here we go.

Scott Hartsman, Rift dev, was interviewed by PC Gamer magazine.Â  Scott talked about dynamic content and how Rift was originally all “100% dynamic 100% of the time” but it “lacked clarity” because, supposedly, the player could not feel attached to a “dependable” world — the player didn’t have those “touch points” of familiarity.Â  In a sense, the game didn’t feel enough like WoW — to be blunt — and Trion feared for their ability to attract their share of players.Â  To overcome this, Trion made Rift a very generic themepark and inserted a “layer” of dynamic content on top so that the two could “interact” with each other. 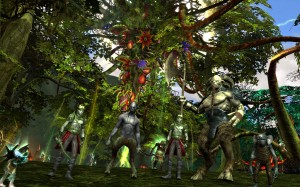 In my opinion, the reason why the “100% dynamic 100% of the time” internal version of Rift lacked clarity was because all you had were a ton of random scripted events firing off everywhere giving the player absolutely zero purpose for playing other than shutting them down.Â  I bet it was the most epic game of wack-a-mole ever.Â  Adding in the static/generic themepark elements only emphasized the dang scripted and anti-dynamic feel of the events.

Scott went on to say in the interview that a big problem players had with the content was that they wanted it to happen on their schedule.Â  I totally disagree with that statement: 1) That’s the opposite of dynamic, and 2) The players actually wanted something truly dynamic, which is why they had a problem with the scripted randomness in the first place.Â  The interview then takes things further away from the definition of dynamic by talking about a system where the player basically clicks a button to initiate an instant adventure.Â  The idea of a truly dynamic world is completely gone by this point.

The whole interview just reinforced my opinion that people don’t know what dynamic means, and they have no idea how to make content that is dynamic.Â  Know why? Because you don’t –MAKE– content that is dynamic!Â  You make a world that allows the players to create the dynamic feel.Â  Dynamic content creates itself when you facilitate the means through which players can interact.

You can put as much spin as you want on public quests, rifts, invasions, or whatever you want to call them, but at the end of the day they are only scripted events.Â  If you want a truly dynamic world, the player must be in control or your world must persistently change as the players interact with it.