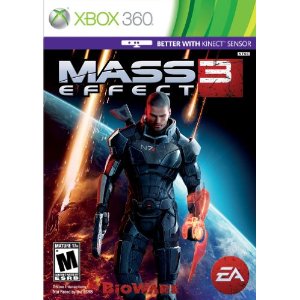 Our copies of Mass Effect 3 have shipped (yay for free release-day shipping!) and we’re anxiously awaiting their arrival.

I played ME1&2 this past summer at Graev’s behest.  I was reluctant to give them a try, but quickly found myself actually playing through them from start to finish without even wanting to play other games.  That’s rare for me when the game is singleplayer.  I loved playing them.

Graev is, at this very moment, “polishing up” his ME2 play-through to be fresh on the story and get in the mood, and I’m going to have him fill me in on the details since they’re already fuzzy for me.

We’ve heard a few rumors (no spoilers) that the decisions made in previous games don’t carry over all that much into the third game.  I played 1&2 on the PC, but ordered 3 for the Xbox 360.  I’m sorta hoping that it doesn’t matter now because I’m screwed either way.  Regardless, getting them both on the Xbox 360 allows us to play the coop together.  Coop, from what I’m told, does impact your story.

We’re both worried about the recent trend of Bioware games. Dragon Age 2 had good combat, but was turned into an entirely different game with a lot less abilities.  We were at Bioware’s Dragon Age Origins presentation during E3 2008 when they said that Dragon Age Origins was the beginning of the series about the origin of your character and made it sound like the rest of the games were going to build on each other. DA2 felt rushed, was full of retcons, and reused areas (blocked off paths with rocks to make the areas ‘different’).  DA2 should have been a side game called “Dragon Age: My Life in Kirkwall.”

ME2 straight up got rid of loot entirely and streamlined the weapon system to make  telling which gun was better very weird.  ME2 was also pushed into more of an action and less RPG direction. It wasn’t at all as disappointing as DA2, though, and like I said I really enjoyed the game.

I think I hear Graev doing vocal warm up exercises in preparation for the Kinect voice commands.