GW2 just took the top spot on my list of must-have-games.Â  Reason: ArenaNet has, on paper, come the closest to replicating DAOC.Â  World vs. World vs. World has just been detailed by Mike Ferguson, and everything he has to say makes me giddy.

Those familiar with DAOC will already have memories of how most of this works.Â  For those who missed the DAOC experience, I hope that GW2 finally brings you up to speed with the best way to do PvP in a MMORPG. 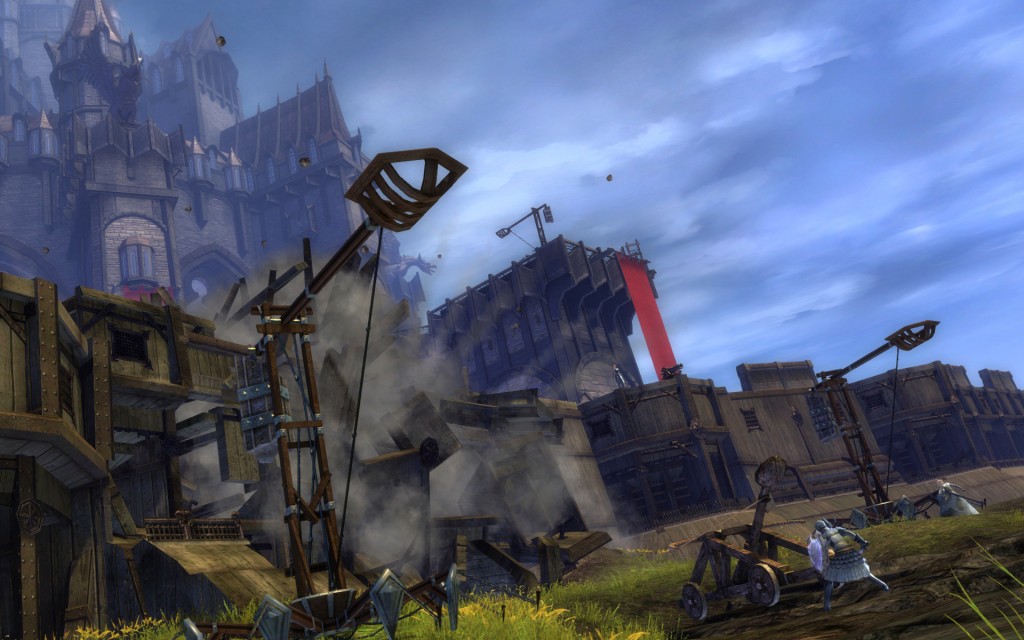 I really like the idea of server vs. server now.Â  In DAOC, each of the three factions grew very close because you were an entire team against two other teams.Â  You were fighting for meaningful objectives, for reputation, for honor, and glory.Â  In GW2, you’re fighting for all of those and for the ability to move up in what sounds like a ladder system.Â  Every two weeks your server is evaluated based on how you did and then given a new server to fight against.Â  I like the sound of creating healthy competition between servers; maybe that’s what’s needed to create the infamous “realm pride” in today’s market.

I’m in love with the idea of lower players joining the fight and continuing to progress while playing.Â  Giving everyone the opportunity to play removes segmentation and contribute to the server’s victory that week.Â  I hope that ArenaNet improves their bolstering system over that of WAR and SWTOR, but even if they don’t I can’t imagine why having more bodies would be a bad thing in this type of PvP (whereas in 8v8 having lowbies sucks).

A PvP system like this emphasizes the whole realm and removes the focus off of the individual and even off of the guild.Â  Guilds still benefit the server through their organization, but I can be in a guild of 5 friends and jump into WvWvW to contribute 100% as much as the next person.Â  Since the maps are “absolutely gigantic”, players can spread out and stratigize movement, smaller groups can avoid zergs, and a real battlefield experience can be had.

ArenaNet is giving me everything I want in PvP.Â  I don’t even care about their PvE game anymore.Â  I haven’t even read up on any sort of PvP progression (is there one?).Â  With no subscription fee, playing GW2 has become a no-brainer.Â  With this type of PvP and no subscription fee… it almost feels wrong.