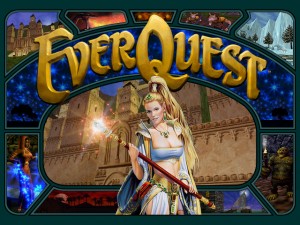 EverQuest (the original this time) will be going “Free to Play” this March.Â  It would be crazy to begin any conversation about EverQuest without first tipping our hats to a game that has lasted, as a subscription model game with a population, for 13 years.Â  SOE loves making things free now.Â  It’s the new trend.Â  But is it really free?Â  There’s a break-down as to what is what is free, what costs $5.00, and what remains available for the full subscription price of $14.99 per month.

Let us not forget, this is a business.Â  Their goal is not to provide a free service — they aim to make money.Â  Sure, you can play that first tier without paying a single penny.Â  Anyone who knows EverQuest knows that the restrictions on that first tier are enough to make it quite unpleasant for any long-term play.Â  The point I want to make, one that I feel is very obvious, is that SOE is going to use you if you’re a free player.Â  You’re not getting -anything- from SOE by playing for free.Â  They have turned that first tier of free players into value for their own product.Â  You become a body in a world that makes the game feel alive for the people who truly matter: those $14.99 per month players. If nothing else, you help retain those people.

Know why the $5.00 tier exists?Â  Because even if it were $1, they’d be making money on you.Â  Anything is better than nothing, and a free to play model such as this works by increasing volume.Â  Essentially, they’re hoping they get enough people trying it that someone is caught in their fishing net.

I don’t mean to make this sound so cynical.Â  It’s reality, though.Â  This is about retention; retention of those players who would pay $14.99 already. It’s also about a cash grab, which I feel I’ve made plain enough already.Â  I don’t think what they’re doing with this free to play model is a bad thing, despite pointing out the obvious reasons which in and of themselves sound bad.Â  It’s just business.

Turbine takes the ever-popular neutral position by saying that it’s all about giving players options.Â  My first inclination is to agree.Â  It sounds neat on paper. Look at the choices, though.Â  Do you really have choices in a model like the one Turbine and SOE use?Â  It’s six of one, half a dozen of the other.Â  You’re going to end up paying about the same price no matter what way you go (if you actually PLAY and not just visit a few times), and the free to play model that they use ends up screwing with buying advantages (a problem Turbine does have, and one I predicted).

Know what would be interesting?Â  I want to see a MMORPG designed to play free using a model like League of Legends’.Â  From the ground up, have any purchases be cosmetic or relatively as obtainable as anything in LoL.Â  Why not?Â  LoL makes plenty.Â  Shouldn’t a MMORPG be able to as well?Â  I can’t vouch for how fun it would be.Â  I lean heavily to the side that believes free to play games can not offer the same scope or gameplay as subscription games, but I would certainly be willing to give one that claims they can a try.

I encourage you to take a closer look at these “free” to play models.Â  Be especially cautious about subscription games going free to play.Â  There is always a business decision behind the reason, and chances are they’re using you one way or another.