Would Reckoning make a good MMO?Â  That’s a question I’ve been going over in my head since playing the demo (several times) these past few days.Â  We know that 38 Studios is creating a MMORPG (codenamed Copernicus) set in the same world as Reckoning.Â  How well would the RPG adapt to MMO status? 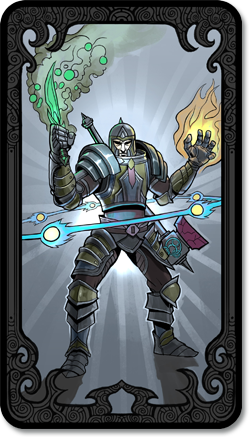 The world of Amalur impressed me right away.Â  The setting is vibrant and enchanting.Â  On the official site are world maps; something about them appeals to my sense of exploration.Â  Perhaps I like the map because it looks like my old cloth EverQuest map.Â  I love traditional high-fantasy stuff like Amalur. Â  Inside this great world are cultures, factions,Â  and fleshed out races with rich histories.Â  There is so much substance to the world itself that it’s almost impossible to fit it all into a game.Â  The richness of information does not feel thrown together or without purpose, unlike many games which feel foundation-less.

Reckoning’s character progression is what I am probably most intrigued by.Â  I really like this idea of Destinies and molding my character to play the way I want him to play.Â  If I want to be a Fighter-Mage I can, or even a Jack of All Trades.Â  The simplicity of Might, Finesse, and Sorcery (like talent trees) within this framework allows for further ability choice.Â  I hope that Copernicus has the same character progression.Â  It’s not quite a class system, nor is it a completely free skill system without structure.

Furthest away from any traditional MMO is the combat in Reckoning.Â  I really like the combat.Â  It has a certain ‘heft’ to it; a particular ‘oomph’ to the action-feel.Â  The animations act as a global cooldown, thus limiting ones ability to spam.Â  Spells, melee, and other actions all seem to flow well.Â  I was playing a rogue-mage in the demo and I would throw out some lightning and then dash in with my daggers. Charging up attacks makes for some crazy attacks.

The combat functions perfectly without a hotbar (which is why I’ve grown fond of using the Xbox 360 controller), and hotbars are something I would love to see phase out — or at least that standing in place pressing 1, 2, 3.

I wonder if the same engine will be used.Â  “If only MMOs could look and play like this.”Â  I say that all the time.Â  I’m afraid that the world would look less enchanting and the combat would be less dynamic in a MMO, but I don’t think it has to be that way from a DESIGN perspective.Â  It might be a TECHNOLOGY issue.

Copernicus, if like Reckoning, could be approached as a hybrid MMO: part themepark, part sandbox.Â  Many themepark elements are there, like questing.Â  Many sandbox elements are in the game as well, like the non-linearity of exploring the world and going where you want.Â  Copernicus could easily take the ‘form a party and set off adventuring to find stuff to kill’ approach instead of the themepark method of questing to level and only really grouping at end-game.

To answer my original question, I think Reckoning would make a phenomenal MMORPG.Â  Reckoning has the world, the lore, traditional action-rpg combat system that I would love to experience in a MMO, and a very unique class system that would function perfectly in a MMO setting.Â  I hope that someone in charge over at 38 Studios is capable of seeing the vision as clearly as I see it in my mind.Â  Copernicus can be amazing.