Graev and I have been exploring the planet of Corellia today as we near the end of our leveling adventure.  We’re a good chunk into level 48, so it shouldn’t be more than a couple of days (max) before we’re 50 and no longer visiting these planets.  I find myself saddened somewhat by the linearity of SWTOR.  There will never be a reason to return to Voss, never a reason to see the snow of Hoth.  That’s why I enjoy taking in each setting, appreciating the details.

Corellia is a planet with some detail! 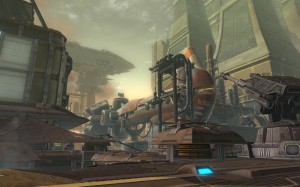 Bioware seems to have saved some of the best atmosphere and scope for the end.  This planet takes vertical immersion and sense of “woah” to new heights.

There are ships docked, crashed, and being worked on everywhere.  The cityscape atmosphere is slightly annoying at times because it becomes a chore to maneuver around buildings and ledges, but it’s worth it to see the sights.  The quests are also nothing special; more of the same killing droids and Imperials, but the class stories are coming to an end — hopefully a good one!

Moving between questing hubs is done via this tram-like transport.  I love how it acts almost like a tour of the city, zipping in and out of tunnels and maneuvering around buildings and track.

Once we hit 50, we’ll give our impressions of each of the Operations and Flashpoints as well as a look at Ilum (which should be interesting, given today’s news).