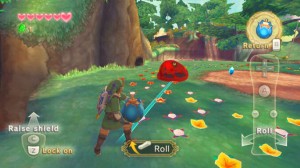 I have only put a few hours into The Legend of Zelda: Skyward Sword

but so far the game is shaping up to be one of my favorite Legend of Zelda titles. Without giving too much away, you basically start out in a town on a floating sky island. Eventually you gain access to a flying bird mount that lets you soar around and offers some light exploring options. The main game dungeons are found on the surface, below the cloud layer. I’ve only completed the first dungeon, so I can’t comment much, but so far I really like what I’ve seen.

The motion control scheme had me hesitant at first but I actually really dig what they have done with the wii motion plus. It makes the combat fun and interesting by requiring you to approach enemies differently, rather than mashing the swing button. All in all I would say the motion controls work great and are a success. The only real complaint I have has to do with anything that requires you aim directly at the screen. For some reason it seems the sensor bar isn’t being utilized to detect where the onscreen cursor is positioned, instead I believe it utilizes the motion plus which doesn’t seem to work out so well as it requires recalibrating pretty often. Fortunately that is as simple as press down on the d-pad to reset the cursor but still, it can get annoying.

The game’s visuals are nice, or at least I think so. It’s on the Wii, so I wasn’t expecting much, but it still looks decent on my HDTV. Keen, on the other hand, thought it looked like crap but he’s a self-admitted graphics whore. The art style is pretty good and I dig the brighter colors that are used. It’s all nice, by wii standards, but I guess it’s most likely going to be love-it or hate-it.

I could easily see how some Zelda fans might not dig the game. It is a little different than what we usually get, but it works for me. Do I want the next Zelda title to utilize motion controls? Mmm, probably not, but it was a nice change of pace and really makes up for Twilight Princess in my eyes.