It’s Halloween already.Â  It’s not as much fun when the day surprises you, but that’s what happens when you’re more busy with school or work and less with the holidays.Â  I (Keen) was in a Finance class trying to fall asleep when someone walked by in a princess costume.Â  I looked around and realized about 5% of the theater (about 200 seats) was in costume.

Halloween is a traditional time for the Blog.Â  Although not anywhere near the date when we started our blog (February 2007), this day has become a tradition of â€œwhere are we now?â€Â  In 2007, when we first started the tradition, we were playing EQ2 on Antonia Bayle,Â  2008 was spent in Warhammer Online,Â  2009 was oddly enough spent in Aion, and 2010 was spent in World of Warcraft.Â  This year we are not playing any MMO’s.Â  I feel like the tradition has died!Â  How fitting for Halloween.

We are both waiting for Star Wars: The Old Republic, which doesn’t launch until December 20, so here’s a pumpkin that looks like the Deathstar. 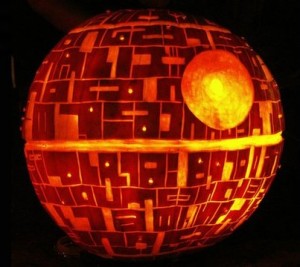 Let 2011 be known as the year we were waiting for a MMO to play.

As for the day itself, I (Keen again) went as a Hobbit (Sam) to a few parties this weekend.Â  I won best costume and people loved it.Â  Good times.