It’s been a while since we updated you guys on the progress we’re making with our classic adventure game.Â  We’re still not ready to release the title or reveal any major characters, but we want to give you a look at a scene that differs slightly from what we’ve shown previously.Â  We’re not going to reveal many more of these since seeing a scene for the first time is part of the fun in games like these. 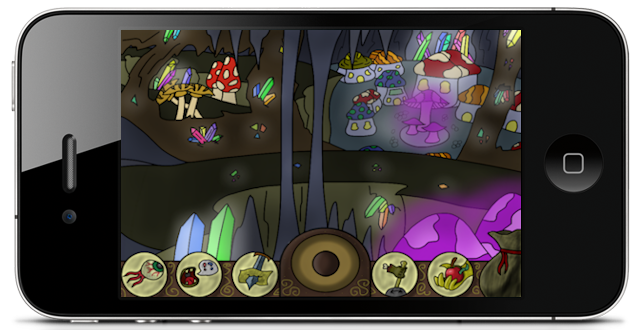 Note: Everything we show is currently in progress.Â  That means stuff can and will change.

One of the main things we want to point out right away is the updated UI.Â  After much testing on the iPhone and iPad we decided that the D-Pad wasn’t working out how we wanted.Â  Instead, we explored other adventure games as well as a breadth of other games on the mobile devices and decided upon using a ‘slide pad’.Â  Owners of the 3DS will know exactly how this thing operates.Â  You put your finger on it, slide it outwards until it stops, and your character moves based upon the angle.Â  When you let go, it snaps back into place.Â  This not only feels more natural but the characters move much better as well.

That’s all you’re getting for now!Â  We hope to have some characters ready to show you next week.Â  Maybe we’ll make it a regular event to release stuff on Fridays.Â  If you have any questions, we’re happy to try and answer them.