I’m all about tools that help build and foster a better online community.Â  Shooter style games often call into one of two categories: Really great community or absolutely none at all.Â  Lately it feels like even the properties with a rich history of community are not living up to the past.Â  MW2 had absolutely no community.Â  Black Ops, even after adding dedicated servers, has what feels like less community than MW2.Â  Bad Company 2 beats the Call of Duty communities of late but still can’t even compare to Team Fortress 2’s.

Activision plans to release a service called “Call of Duty Elite”.Â  Based on what they’ve released already, here are my thoughts.

Career – Very detailed stat tracking.Â  Nothing new here, but for the real elite players this stuff does matter.Â  Something about seeing the k/d ratio gets some people very giddy.Â  Personally, I like looking at how bad I do but this isn’t anything new that hasn’t already been offered for free in the past.

Connect – It’s essentially a social networking of players.Â  If I create a group called “Keen and Graev” then anyone who wants to search and start playing with others in the Keen and Graev group.Â  This idea really shines on consoles but I feel like it’s also been done before in the PC market via Steam and dedicated servers tools.Â  Depending on how they implement the idea, it may prove to be even better than Steam’s tools.Â  I’m doubtful, though.

Compete – Built in support for tournaments or “activities” is awesome.Â  Again, console players benefit the most from something like this but the PC market can just as easily benefit from a system that automates the joining and participation process.Â  Contests to win real and in-game prizes in what is hopefully a very sleek and polished system makes this sound like the best feature in the ‘Elite’ package.

Map Packs – You get them all for free if you are an ‘Elite’ member.

Okay, so the real question here is whether or not these services, which are dubious to the PC player at best but really cool to the console player, will be worth the subscription fee that Activision will inevitably charge.Â  Getting the map packs for free if you are a member makes me think the price will be competitive enough to drive more players to the elite service than normally buy the packs but high enough … If I had to guess I would say $7.95 give or take a dollar.

How will they handle people who stay ‘Elite’ just long enough to get a map pack and then cancel?Â  There are still lots of questions.

If I were EA, I would launch competitive features FOR FREE and release them all with Battlefield 3 to make Activision look stupid.

Totally unrelated but this came to mind: 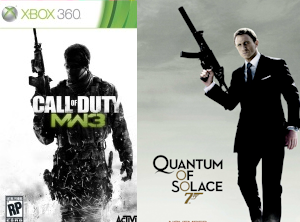