I thought I’d share with you guys why I do not write a lot about Rift as well as what my thoughts and plans are regarding launch.Â  As you well know, I’ve written a few pieces on Rift in the past that can be interpreted incorrectly as: “Keen does not like Rift!”Â  That can’t be further from the truth.Â  I like Rift and think its a fine game, but I don’t hesitate to point out that it’s nothing new nor anything to freak out about.

As the hype monster begins to surface with less than a month until release, Rift enters a dangerous phase.Â  Lots of shiny videos and exclusives get thrust out there and people take it upon themselves to spread the good word about how the game will be the next best thing.Â  It’s kind of like how Guild Wars 2 or SWTOR release these big news stories on the sound in their game… yes, the sound…Â  and you get people replying with comments like, “Man I can’t wait for this game!!!”Â  …Â  … you were really that jazzed about the sound?Â  No, of course they weren’t.Â  It’s just the excitement you feel like you did when you were a kid and your parents surprised you with a trip to Disneyland. Suddenly every commercial has you jumping up and down and you watch all the animated classics in preparation for the big event.

Three types of lies in this world: “Lies, damned lies, and statistics MMO’s”

One very bad and misleading trend is the “Rift vs. WAR” and similar featured articles.Â  I’m guilty of writing a few of these type of articles myself.Â  Unless it is point by point factual and objective, I recommend you dismiss anything telling you Rift is “different”.Â  Rift is very much like WAR, WoW, and several games (like EQ2).Â  That’s partly why it’s a decent game guys.Â  It’s not groundbreaking but polishes up and repackages many things well.Â  Don’t believe the lies telling you that Rift has somehow magically solved the “problem” of playing with others.Â  Lies.Â  If you want to read a bunch of lies and hyperbole go read the latest Rift vs. comparison thread. Believe any of it and you’ll likely be in for a roller coaster ride that I’ll describe below.

Below is a fairly well known visual representation of the hype cycle.Â  It’s really nothing new and anyone who has ever been involved with anything hyped will immediately understand -and- identify with it. 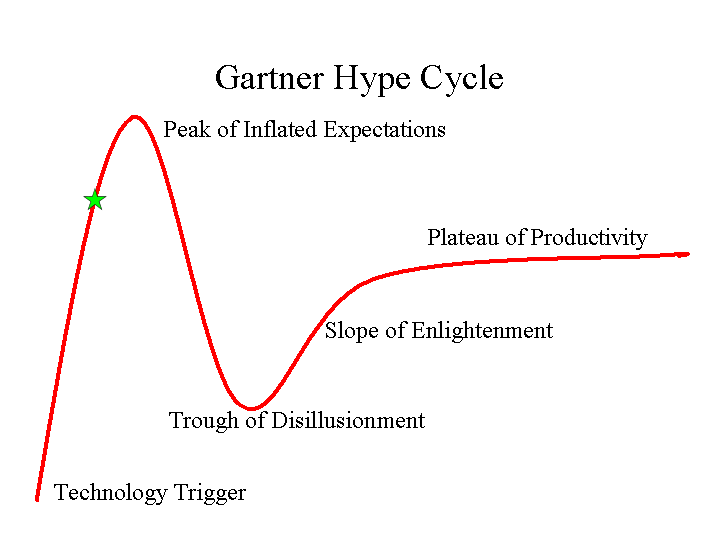 We’re about where the green star is right now.Â  People are starting to get ramped up and lose their cool and the game is getting blown a little out of proportion.Â  They’ll reach a climax the day before launch with these inflated expectations of what the game will be like and then begin to come back down.Â  The problem is, the higher the game climbs towards expectationsÂ  the lower it’ll dip down into a place that I know all too well called the trough.Â  A deep trough is what every single MMO developer should fear because this is where your game never recovers.Â  This is where Vanguard died, WAR got stuck, and so on.

Rift belongs somewhere after the slope of enlightenment.Â  That’s why I have not written about the game much — I do not want to contribute at all to people getting worked up.Â  I’ve made it abundantly clear that the questing is rather dull but the classes are interesting.Â  The PvE content may not be abundant, but it’s on par where quality is concerned. For me, the game’s potential rests solely in how the PvP is fleshed out and how the world is integrated into the gameplay.Â  If it becomes an instance/dungeon run game then I won’t bother.Â  If the world is used in some capacity and feels lived in and played in then I’ll stick around.

I’m debating whether I should buy it at launch or wait to see if it falls flat quickly.Â  Since I personally feel the game is decent, I’d be willing to bet it won’t plummet like WAR did.Â  However, and this is a warning to the masses, it will never meet the inflated expectations.Â  That’s why ever since the first beta event I’ve kept my distance.Â  I’m going into Rift knowing where it belongs on the curve.Â  This is good advice for any game.