What do you see in these images below? 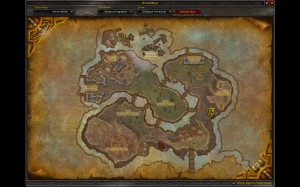 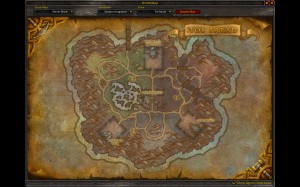 I see areas designated for PvP.Â  I see several keeps and landmarks that appear to be capturable.Â  When I look at these two islands off the cost of Eastern Kingdoms I’m immediately reminded of Frontiers from Dark Age of Camelot.Â  These areas, Tol Barad and Tol Barad Penninsula, would make the perfect open-world PvP zones for World of Warcraft.Â  The keeps could be captured and held and remain vulnerable at all times.Â  When one of the factions takes a keep it is available for guilds to lay claim.Â  When owned the guilds can upgrade the doors, walls, defenses, and prepare them for being resieged.Â  This is how it worked in DAOC and how I can imagine it working in WoW.Â  Just looking at those pictures long enough I can see the battles playing out in my mind.

Unfortunately, Tol Barad will operate similar to Wintergrasp.Â  The battles will last a specific amount of time and there will be queues.Â  It’s simplified to nothing more than a king of the hills/own all 3 at a time to win the glorified battleground, then it resets in an hour.Â  That is a lost opportunity.Â  Instead of finally having a real open-world experience, it’s more of the same.Â  Blizzard themselves stated that Wintergrasp did not live up to their vision.

Open-world PvP has not been done right by Blizzard ever.Â  There was a time when it happened naturally due to the natural questing landscape in areas like Hillsbrad, but now it seems like Blizzard does everything in their power to alleviate players feeling like they’re at war with the other faction.Â  Even on PvP servers, it remains taboo.Â  I’m anxious to see what happens with areas like Southern Barrens, but even more so with Tol Barad and the missed opportunity they’re taking in favor of more of the same.

Whoever owns the area get access to the Penninsula, aka the questing hub.Â  That’s great.Â  It can act like Darkness Falls did for DAOC.Â  Why not allow the PvP area to remain under constant contention, though?Â  Why not allow for it to change hands regularly and have the location be a real battlefield?Â  I suppose they’re worried that it will turned into a cluster of lag and mass chaos fueled by population imbalances.Â  There are ways around this.Â  Why not limit the number of players able to enter much in the same way that players are limited by a queue when trying to join a full server?Â  If it’s bad enough, let them enter a queue for the flight master/teleport/whatever to take them over to the island.

Blizzard chooses not to do open-world PvP , for whatever reason.Â  I want to say they’re incapable or don’t understand, but they’re too in control of their own destiny for that to be the case.Â  I’m still holding out for a day when WoW embraces its nature and becomes a real PvP game.Â  Warcraft -is- a PvP property.Â  The very foundation of the game was Alliance and Horde killing each other.Â  One day they’ll realize this and make the greatest PvP game we’ve ever seen.