Real busy week with tests and midterms so my playtime has been minimal and my time to blog is even less.Â  I do however want to give you guys a taste of what’s to come with our FFXIV coverage.Â  Here are some screenshots of our adventures today.Â  Click on them to make them bigger.Â  These are taken on the exact settings that I play the game on.Â  The world is absolutely beautiful.Â  The character models and some of the style of the graphics look very Eastern (Asian).Â  At times the characters all look like pale porcelain dolls with androgynous big hipped bodies and faces, but you really can look past that if you try hard enough. 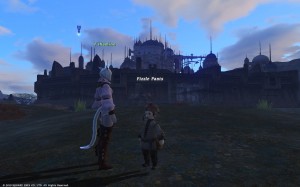 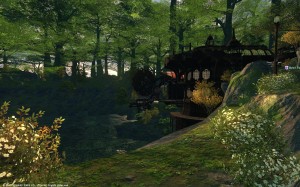 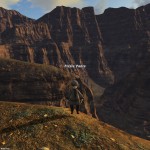 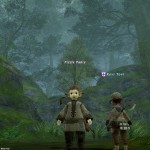 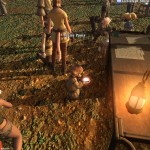 In this entry I just want to focus on the world and what I’ve seen so far.Â  It’s actually much bigger and much more open than any MMO I’ve played lately.Â  I ask Graev all the time: “Can we go there?”, referring to something in the distance.Â  His reply is “Yes, let’s go” and we explore and adventure. The views are breathtaking.

We traveled from our starting city (some desert with a name that starts with a U) to one near the lower center of the map.Â  The trip took us one hour of non-stop running.Â  Along the way there were several neat things to look at and many detours we could have taken but we kept strictly to the path.Â  We passed from the desert to this forest area which is the only time we have ever zoned.Â  The transition was harsh in terms of environmental effects, as it went from desert to forest while loading.Â  Other than that, the entire world has been seamless.

I’m very surprised at how immersed we were in the world.Â  I get lost in it and I quickly lose myself to the experience.Â  This is one of the most pleasant surprises about the experience and it’s honestly so important to me that I’ve chosen to share it with you guys first.Â  If nothing else, they’ve done what many can not and that’s create a world for players to feel like there’s more than meets the eye and like it’s bigger than they can perceive all at once.Â  Sure, this is largely due to the fact that it’s a new world but in the past five MMO’s the worlds were also new and I never felt immersed like this.

There’s plenty to complain about, but the world is not one of them.Â  If nothing else, I’m glad Graev got me to play the game again long enough to see the world. Â  Coming up will be my posts with my thoughts on combat, crafting, controls, the class system, and Graev’s overall thoughts on the game.Â  I will also be Livestreaming all week.