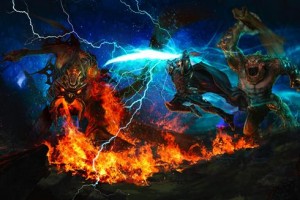 Kingdoms of Amalur: Reckoning’s announcement today was a nice surprise for me.Â  I haven’t been following this single-player RPG of theirs at all, aside from the fact that they sold out to EA with the project.Â  I can’t remember whether or not they actually said this one would be a Fantasy title.Â  I know that the project codenamed Copernicus will be Fantasy themed though and I guess I always assumed the single-player game would be as well.

Fantasy sits very well with me.Â  I like the Fantasy theme over Sci-Fi, Post Apoc, Steampunk, — I like it over all of them.Â  What I like the most is that they’re going with a High Fantasy and not simply a ‘lets make it medieval with swords’ style.Â  I’m also really into the idea of this being a new property that will be known by a name.Â  If you say “Warhammer” or “Star Wars” then you immediately know the universe and the style.Â  If you say “Darkfall” there’s really no story or expected theme that goes along with it.

I’m expecting Amalur to have a solid story, solid characters, and overall to be a memorable IP.

With Morrowind and Oblivion’s designer Ken Rolston heading it up, I’m really hoping that based on the following quote that we’ll have the next evolution in RPGs that aren’t done in the Bioware style.Â  Oblivion was a good game but the control and experience was a little ‘removed’ for me and hopefully this specific direction will focus the talent at work.

“In Reckoning, we started with Bob and Todd’s exceptional Kingdoms of Amalur game setting and imagery,” said Ken Rolston, Lead Designer at Big Huge Games, a subsidiary of 38 Studios. “On that foundation we built the open-world exploration, vast narrative and character customization fans expect from the best RPGs. And we’ve added something new that we’ve always wanted from the genre — a fast-paced, graphically stimulating action combat experience with fluid control and immersive, discoverable gameplay fans haven’t seen before in other fantasy RPGs.” [Source]

Am I making things up by saying that I remember reading somewhere that the RPG and MMO would be somehow related?Â  If so, a High fantasy MMO with a new original and memorable IP with solid characters and story is exactly what we need.

There are plenty of Fantasy haters out there who will say that the market is over-saturated with Fantasy titles, but I don’t agree at all.Â  If anything we’ve seen games being released all over the spectrum and the Sci-Fi or Modern genres have been flourishing as much or more than Fantasy.Â  Bring on the Fantasy.

Expect my thoughts on Kingdoms of Amalur: Reckoning more this week when the trailer is released on the 22.