After a lot of work, Happy Fun Guyz downed Sindragosa!Â  Nothing has come easy for us the past couple of months.Â  When a couple of people aren’t busy in RL one night a couple of others are having internet issues.Â  One thing after another has kept us from pushing through Icecrown Citadel but that problem seems to be behind us.Â  We finally have a consistent group of people that really want to progress and see it through to the end and we’re doing it as a casual group of friends.

Sindragosa was really quite easy with the enormous buff given to the raid now.Â  However, even with the buff there is a certain degree of precise execution required.Â  We got it down. 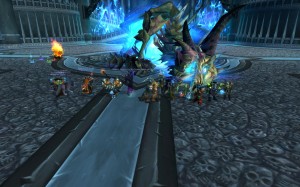 Read on for more screenshots of my Lich King Adventure… —> 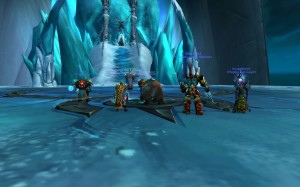 Speaking to Tirion began the encounter and the Lich King descended down the steps right towards us! 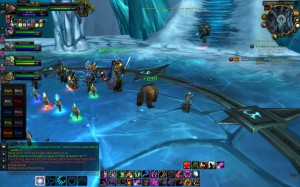 I was tanking the Lich King!Â  I’ve waited for this moment for years.Â  This is the climax of the storyline that I waited all night in line outside of Fry’s Electronics for when I bought The Frozen Throne expansion for WarCraft 3.Â  This is why I decided to raid once again in World of Warcraft after coming back to the game looking for a polished and fun experience to last me until ‘the next big thing’. I totally did not feel worthy at all to be fighting him. 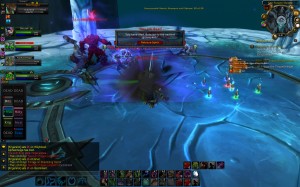 … and worthy I was not.Â  We decided to give him a go without really looking into the fight at all.Â  We’re going back next week and we think we’ll make great headway.Â  It looks to be a fantastic but busy fight with something like five phases.Â  I hope to update you all soon with a victory screenshot!Â  Until then, view the Lich King in all his glory! 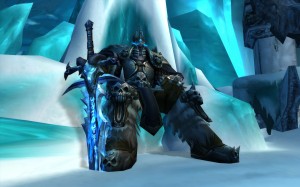