During the EA press conference…. well, during the end of what was a rather boring press conference… SWTOR finally had a few minutes.Â  Two big announcements were dropped on us like they were nothing: Space Ships and PvP. 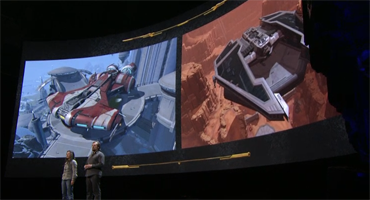 “Every player will get his or her own starship.”

“They offer home for players to use as a base of operations from which to explore the galaxy”.

Second Thought: Wait… “Base of operations” … dang, I bet that’s totally going to be instanced and used as a way to launch into more instances and private missions.Â  It’s going to be handled just like KOTOR used them.Â  I’m willing to be it won’t be more than a few cutscenes and opportunities to talk to your companions within the ships like players have been doing in the Taverns in Neverwinter Nights.Â  It’s like a little place to find a temporary reprieve from the world.Â  I think one would be silly to think there is going to be any sort of flying these around in any sort of real-time exploration, fighting, or flight.Â  At most — and I really do mean this to be the extreme of what we may see — we’ll get to decorate them and invite a friend over to check out our “personal style”.

Now in regards to igniting the whole “Which side are you on?” thing, we’ll be doing that by choosing our class from the start.Â  I’m actually very surprised to learn that they will be doing PvP since I had assumed they were going to avoid it altogether.Â  The surprise comes from a lack of faith ( In before “I find your lack of faith disturbing” quotes) but it definitely seems silly to have ever ruled it out.Â  SWTOR will be instanced out the wazoo and battlegrounds type PvP fits it perfectly.

“War zones” <— The name of their Battlegrounds?

“Our first war zone will be on the planet Alderonn Alderaan (Thanks Wren!)” <— Okay, so there will be more than one.

Now the question is whether or not these “war zones” will be mini-game’esque or will they factor into character progression?Â  How will this be folded into the gameplay?Â  Perhaps we’ll get more answers later this week.

I’m incredible skeptical about how either of these will be pulled off gracefully to the extent that they really mean anything to the game.Â  I think the trailer is amazing, but also not anything like what we’re going to be doing in-game of course.Â  I would have preferred them showing us actual gameplay of the spaceships and actual PvP gameplay rather than just nonchalantly announcing the biggest updates to the game in many months.

Crossing my fingers for more info.