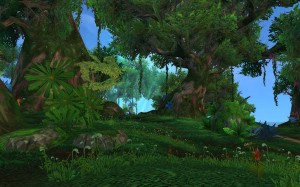 In those ten levels of BC and WotLK there was a lot of great leveling content.Â  However, once you’ve leveled through it a few times you find it to be a barrier in your way of reaching the real meat and potatoes of WoW gameplay: end-game content.Â  Without a doubt, the best content in WoW is usually the leveling journey, but a bulk of Blizzard’s focus (and the community’s) turns to what happens at the max level.Â  Cataclysm, while only adding five at the end, is technically revamping 1-60 as well.Â  It’s a valid argument that Cataclysm revives earlier/older parts of the game which rejuvenates the game as a well.Â  Even in those last five levels (80-85) we’re going to see a solid amount of content with “more high-level raid content than previous expansions”.Â  Condensing lots of content into five levels seems like it could work a lot better than trying to make content for ten.Â  If there is enough content, playing through those five levels may perhaps be accomplished different ways a second and third time.Â  The leveling curve might just be a bit steeper too, you never know.

Leveling content might not be the only benefit of those extra five levels though. From a mechanics point of view, gear might actually carry over a bit more than it did in previous expansions.Â  Unless mudflation really sets in with a huge increase to stats, raid gear from WotLK’s ICC/Ruby Sanctum could easily last through some of the early content in Cataclysm whereas it really didn’t carry over much at all into WotLK from BC.

We know that 85 is going to be a huge difference from 80, just as 80 is from 75, etc.Â  Instead of having characters evolve over a ten level spread, now Blizzard gets to do it in five.Â  I see this as an opportunity for each of those levels to be a huge deal.Â  Talents are already being reworked and new skills being added are changing the dynamics of some classes entirely.Â  Where WotLK dragged on and didn’t really show too much change, Cataclysm could feel like an enormous evolution every ding. The WoW demographic loves to get rewarded in quickly in big ways.

Without having to design for ten levels of end-game (although they are technically doing a LOT more with 1-60), I’m hopeful that we’ll see the bar set even higher (internally) by Blizzard.Â  WotLK was so much better than BC and if Cataclysm is going to be better than WotLK it’s going to happen in a really high concentration all at once.Â  There is also the benefit for returning players to be thrown into the thick of this concentration from the start, instead of having a larger window to acclimate — a window that veterans quickly fly through.

Players will hopefully have to focus less on the actual act of leveling and just be able to enjoy the content.Â  If done right, it could be one intense ride right from the start that lands players at 85 without them even realizing it.