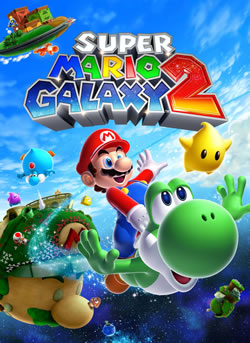 Super Mario Galaxy 2 released yesterday for North America in the wake of extremely good (if not perfect) reviews.Â  I’m a huge fan of Mario games — especially the 3d ones.Â  If you haven’t already poured over the various reviews out there or you’re still on the fence about SMG2, I’d like to share my thoughts on the game to perhaps sway you one way or another.

Super Mario Galaxy 2 is, of course, a sequel to the first in the Galaxy series.Â  It keeps to much of the same gameplay and style but it adds a few things which I’ll talk about in a moment.Â  So let me start by saying that if you had absolutely no stomach for the first one then you should probably stay away from the second… and then regret your decision later.Â  The goal inÂ  SMG2, like the other 3dplatformer Marios, is to collect stars and ultimately save the Princess — oops, did I ruin the plot?Â  Bowser is back and he’s kidnapped the princess, but that’s not a huge spoiler.Â  In fact, the story takes a backseat almost entirely and lets the gameplay speak for itself.Â  Who needs a story in a Mario game anyway?

This time around they’ve done away with the hub that they had in Galaxy 1 and went with the more classic world selector like you can see in New Super Mario Bros.Â  There is still a hub of sorts though on a planetoid-ship-like-thing shaped like Mario’s head.Â  You can run around here and collect extra lives and do other little things, but ultimately it’s just a spot to catch your breath after an exhilarating level before you blast off to the next.

Gameplay in SMG2 is nothing short of fantastic and sucked me right in from the beginning.Â  The Wiimote is utilized quite well with tight and comfortable controls.Â  I’m so grateful that the gimmicky Wii stuff was left out almost entirely from the game.Â  You have a few very simple moves that utilize the nunchuk and the Wiimote — moves that you’re already familiar with if you’ve played other titles: Long jump, side jump, triple jump, back flip, and twist are the ones I can remember (probably all of them).Â  Pointing at the screen, like in the last Galaxy, collects starbits and … get ready for it…. targets Yoshi’s tongue!Â  That’s right, Yoshi is playable for the first time in 3d and he’s friggin awesome.Â  Using these abilities, Mario and Yoshi play through levels that resemble planetoids (like the original) and worlds as you try to find stars.Â  These worlds are gorgeous too and represent, in my opinion, the best graphics on the Wii. Â  I feel that there is more to the levels in this one (In look and substance), at least right away, compared to the first Galaxy. Best of all is the coop mode that allows a friend to pick up a Wiimote and play as your star buddy to help you freeze/kill enemies and collect starbits.

Solving puzzles, killing baddies, and navigating the levels is the core of SMG2.Â  It’s really that simple but at the same time it introduces so many great new tricks that will evoke a “WOAH!” response.Â  Nintendo uses their level design in such a way that there is almost no wasted space.Â  You really are going to turn over every rock and then look at every level from multiple points of view as you flip around, drill through, invert, and have your mind blown. In particular, the Boss battles in SMG2 are fantastic.Â  The third boss (which I won’t spoil too much) utilizes this game’s ability to manipulate 3d space and gives you a while new appreciation for what the guys at Nintendo can do.

Playing through levels several times to get stars and collect the secrets is going to be a must, and it’s not going to be easy.Â  I’m surprised how little I’ve died (partly due to Graev being my star buddy and freezing stuff for me) but I can already tell it’s going to be a rough ride a little later in the game.Â  The puzzles are requiring a lot more thought and there is much more to them.Â  Being able to think ahead and the fact that there is often more than one way to accomplish something makes for a really fun ‘figure it out’ experience and a major sense of accomplishment when you beat a level and realize you held your breath through the last 2 minutes of it.Â  Luckily they throw extra lives at you like they’re nothing because you need them.

There is a ton to do in SMG2 with something like 6 worlds and lots of secrets throughout.Â  I’m usually not one for singleplayer console games, but SMG2 sucks me in with its inviting atmosphere, fun ‘get in/get out’ gameplay, thought provoking puzzles, AMAZING soundtrack, and how well it has introduced so many new ideas to platform gaming.Â  I like it much better than the first not because there are immediate differences (although they are apparent the further you go) but because of how quickly the game engaged me and got me hooked while presenting all the great things I love about Mario.Â  If you love Mario, love the 3d platform versions, don’t mind a challenge (because it’s not an easy game), and want to have fun for many hours then pick this game up right now.Â  Since I have not beaten the game just yet I won’t give it a score, but I will say that it’s now my favorite game on the Wii.