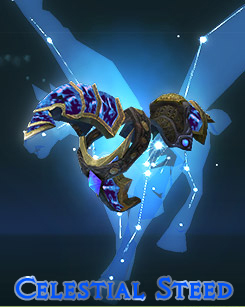 Update: Blizzard has now stated that there is no limit on the number that can be purchased.

This afternoon Blizzard released two new items to their store: The Celestial Steed ($25) and Lil’ XT ($10).Â  The Celestial Steed is the first mount to be sold by Blizzard in their store and I think it raises a few good points to make.Â  First, it’s a microtransaction (or macrotransaction given the price).Â  However, it’s not the bad kind.Â  This mount scales based on your character’s mount capabilities ranging from the normal speed mount all the way up to the epic mount and beyond to even the 310%.Â  Having played WoW fresh on a brand new character without a dime to my name, the ability for me to make money and achieve these mounts came with ease.Â  I’ve had so much money while leveling up that I’ve never once wanted for anything.Â  I did nothing special, so I know that anyone can replicate my results.

Essentially the horse is a cosmetic item.Â  You can easily obtain a mount, but if you want it to look like a sparkling pony then you’re going to have the pay for it.Â  I think that this is a perfect example of good microtransactions.Â  There is nothing about this mount that would make anyone feel like they’re being jipped out of something or being restricted from having something that should be available out of the stock game.Â  Selling ‘cool’ things like this should be the model for all MT games.

Blizzard’s approach is really quite ingenious.Â  They already have a working sub model that brings in ~$15 a month.Â  Now they’ve added ‘cool’ stuff to their store — not just cool, but high quality — and placed price tags on them that will generate insane amounts of money.Â Â  This has to be the best way to make money.Â  They’re being paid by everyone playing and everyone also wants to pay them for cool stuff.Â  On top of all of that, they’re artificially creating a shortage by stating there is a certain number available in stock.Â  Now people are rushing like crazy to the store.

Have doubts about what I just said?

Dalaran is flooded with people riding them.Â  The percentage of stock left is being constantly announced in trade chat on my server and the whole server is abuzz.Â  Players are excited and motivated about a sparkly horse! Â  Meanwhile, Blizzard sits back and gets rich.Â  I think it’s brilliant.

I would definitely use this model in my MMO.Â  I think selling high quality ‘cool’ cosmetic items and creating rarity and excitement can only help a game.