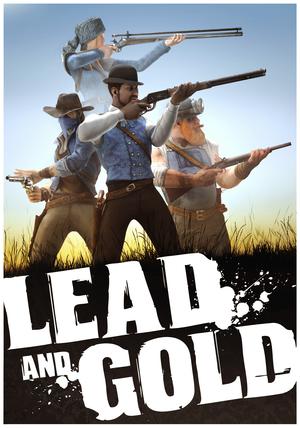 Have you heard about Lead and Gold: Gangs of the Wild West?Â  I hadn’t heard anything about it until Graev tells me he’s downloaded the beta and that it comes out soon.Â  It’s a third person shooter developed for PS3, 360, and PC.Â  Delivered via download only, it’s a game that I believe is available for the Network, Arcade, and Steam.Â  Usually games like this go unnoticed or have little competition and in this case I really can’t think of any other game that competes with it on the same level except for BF:1943 (which didn’t do so hot…).Â  It’s all about spreading the word with titles like this one.Â  I think Lead and Gold is an interesting game worth a look.

If you’ve read about it anywhere else you probably see it being related to TF2.Â  That’s actually a decent comparison and the first thing that came to my mind.Â  Although the game only looks like it slightly with the bright and stylized graphics, it plays quite similar.Â  There is a level of zaniness at work.Â  There are four unique classes that each play a bit differently.Â  Each has unique abilities and offers auras that combine for synergistic bonuses with others on the team.Â  The more people work together and stick together, the better the team performs as a whole.

Controls and how the game handles is quite smooth.Â  The aiming system suits the Western feel with a huge circle which just screams spray and pray — but it’s the wild west and shooting bullets all over the place is what people do!Â  Holding shift (or using the aim button) gives you a lot more accuracy but it’s then becomes about holding still and being more precise.Â  Hiding yourself in a saloon and shooting out the window suddenly becomes viable.Â  However, running and gunning as the Gunslinger and fanning your pistol is just crazy fun!

The setting, being a Western, is actually quite unique.Â  I can’t think of a single Western shooter that I’ve played … ever… that has been any good.Â  The setting lends itself nicely (combined with the whimsical fun) to game modes like “Robbery” where you have to blow up a bank vault and steal bags of gold from the other team, Powder Keg where you blow up objectives, and Greed where you deliver as many gold sacks as you can to your teams zone.Â  The maps themselves (6) are detailed and what you would expect from a smaller game (did I mention it’s limited to something like 10 people per map — 5 per team?) and the detail goes a long way towards providing an atmosphere that mimics the old west shootout battles.

I can’t really say that the game blows me away and does anything drastically new, but it’s fun and worth mentioning since it costs a whopping $15.Â  It’s a fun setting with interesting features.Â  Give it a look.