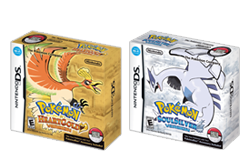 Pokemon HeartGold and SouldSilver released today!Â  Yes, we’re Pokemon fans.Â  Every time a new Pokemon game comes out we always try and make the goal of catching them all.Â  Graev always comes close but I always fall short… way short.Â  I think I reached the Elite 4 in Pearl but wasn’t able to beat them.Â  After trying to raise a team and get back on my feet, I ultimately put the game down and moved on.Â  Not this time!Â  My goal isn’t to “catch’em all” but it is certainly to finish the game.

I’m not being held back by a fire Pokemon this time (I went with Chimchar in Pearl).Â  It feels like every time I choose fire it’s like playing hard mode.Â  This time I went with Chikorita.Â  Nauseatingly cute isn’t it?Â  Hopefully playing with a grass Pokemon will make it a bit easier for me.Â  Graev went with Totodile which is what I went with in Silver when we played Gold and Silver a decade ago.Â  At this point I’m working my way through Sprout tower and preparing to fight in the first Gym which won’t be easy since Flying Pokemon own Grass.Â  The goal is to find a second Pokemon to begin training alongside my Chikorita and not allow myself to just play with the one main Pokemon all the way to the end — terrible strategy.Â  I haven’t decided what the makeup for my team will be… I was considering a Pidgy but decided that it was just too generic.Â  Some type of flying pokemon is going to be mandatory.Â  Other than that, I’m going to try and build a ‘weird’ team of Pokemon that are all strong but not something the usual person would add to their team.Â  Pokemon like Bidoof need some love too.

HeartGold and SoulSilver received a nice graphics upgrade from even the Diamond/Pearl days.Â  It looks like the grass receives a face lift and the colors/textures all look nicer and there are lighting effects being used to add depth.Â  There also seems to be a performance boost.Â  The menus and loading all around are faster and there is less waiting.Â  It’s all very nicely put together and adapted for the use of the touch screen.Â  At times the DS games feel like they make use of the touch feature in a gimmicky sort of way (which keeps with Nintendo’s style this generation), but some of the touch screen use in Pokemon is actually quite efficient and even builds upon the gameplay.

Beating the Elite 4 and completing all of the game’s content are my first goals.Â  After that, I’ll evaluate whether or not I can attempt catching them all.Â  I’m going to make it this time!Â  Anyone else pick up one or both of the new Pokemon titles?