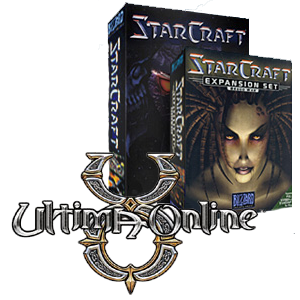 Tonight was blast from the past night.Â  I installed Ultima Online and StarCraft Brood Wars!

Ultima Online… my gosh.Â  Total 1998 rush.Â  I never really got into Ultima Online back then.Â  I played on a friend’s account (I still have his CD… never returned it, oops)Â  and usually just explored.Â  We’ve told the story before of when Graev was exploring and a guy came up to him and said “hey, want some cool stuff?” Greav said, “Yeah!”Â  and the guy said “Okay, come to my house and I’ll give it to you”.Â  Graev, being like 10 at the time, went to this guy’s house all innocently.Â  When the door opened and Graev stepped in it quickly shut behind him and he was then shot in the face with a crossbow by two guys waiting inside.Â  I think that was the last time Graev ever played UO…

For me it was all about mining back then.Â  That’s what I did tonight.Â  I created a Blacksmith and was guided around by a friend who is a big time UO vet.Â  I walked up to a bank and had to a bank and had to type “bank” in order for it to pop up.Â  Interacting with a vendor required you to type “vendor sell” or “vendor buy”.Â  I went up to a mountain and mined lots of ore which I then smelted into ingots.Â  After that, I crafted it into all sorts of things.Â  I made ringmail, chainmail, shields, polearms, and sold it to the vendor.Â  I made a lot of gold and felt really cool.

Playing UO tonight was awesome because it highlighted and again reminded me of how far games have really come in the past 12 years.Â  At the same time it also shows what actually worked then that still works now.Â  The menu systems for buying and selling from a vendor are just as high tech as they are today.Â  They are essentially the exact same.Â  In fact, I think I like UO’s even better.Â  The paperdoll system of equipping and unequipping gear in UO is really cool because you actually drag and equip things onto your character.Â  In many ways this paperdoll is identical to what is still used today as well.Â  The crafting in UO, what little of it I saw tonight, was enthralling.Â  Gathering the ore, smelting it, using different tools and choosing the materials to work with, and then creating the items was such a simple process yet it had depth and reward.

So when I hear about how games today need innovation, I feel like I have once again reaffirmed for myself that they really don’t.Â  They’ve come such a long way but at the same time they’ve retained an enormous amount of what worked.Â  Games over the past twelve years have added a lot and if they’ve all borrowed so heavily from these original games then why can’t the next generation of games in development retain much from the the oldschool and this current generation?Â  Once again I urge people to not be so hasty with demanding things entirely new.

StarCraft…. wow.Â  It’s older than people give it credit for in my opinion.Â  For anyone out there watching SC2 videos saying “This looks exactly like SC” you really need to go play the original again.Â  No video options and really low and blurry/muddy textures and funny looking animations definitely make SC2 look over a decade better visually.Â  Gameplay-wise it’s still good old StarCraft.Â  It felt exactly the same as I remember it.Â  For the people thinking that SC2 is just a remake in gameplay I would have to say they’re probably right in many ways. — but that’s what I want!Â  I think that’s what most SC fans want.Â  You simply do not innovate on StarCraft.Â  You just don’t.Â  It’s simply perfect the way it is and I don’t want it to be any different.

I’m really rusty at the game.Â  In my head I can play through a match and do awesome.Â  I have my build order all set and I know the units and the buildings. Then I actually play the game and I freeze.Â  Umm… where’s this again?Â  Where’s that button?Â  Crap, I forgot those could do that.Â  Lots of “ohhh yeaahh” moments.Â  It was really humbling to get rocked by a computer in the first two minutes.Â  I think there will be a lot of learning over again when I actually play SC2.Â  Maybe it won’t be so bad after tinkering around in the original.

I want to continue this ‘Blast from the Past’ night.Â  Perhaps continuing to play SC and UO but also reinstalling and playing some older games.Â  I’ll even take requests.Â  This could be a lot of fun.