Closed Beta Test 4 began about five days ago for Allods Online.Â  Sticking with my initial plan to level asÂ  far as I can go, even after thinking I had abandoned this plan once, I’ve now reached level 35.Â  Past phases have gone fairly smooth and felt much more like marketing phases than testing phases because the involvement of the testers was not needed for anything more than grammatical corrections, syntax errors, finding tooltips that were wrong, and things of that sort.Â  There were never any big game breaking bugs or mechanics flawed that warranted mentioning.Â  That isn’t the case with Phase 4.

This phase has been a rollercoaster.Â  For the first time I actually got frustrated with the game and for multiple reasons.Â  The first has to do with bugs regarding quests.Â  Coba Plateau is the zone where you complete levels 31-34 — the only one in fact.Â Â  Entering the zone and picking up quests I immediately noticed that there was a lack of them.Â  Usually I’ll enter a quest hub and be inundated with !’s but here there were three.Â  Not entirely unheard of though; sometimes quest chains and other quests open up from just a few entry level quests.Â  Not the case.Â  With 40% of a level left to go I found myself having to grind in order to reach the next level.Â  More quests opened, but this time I noticed that they gave less exp and there still were not many of them.Â  At level 32 I had to grind 60% of the level.Â  At level 33 I had to grind 50% of the level.Â  The problem continued.Â  At level 34 I had to grind 30% of the level.

All of this was reported on the forums and we did our best to make sure this issue received the attention it deserved.Â Â  On the second day of this phase we already recieved an announcement on the boards stating the issue is known and they’re working to resolve it.Â  Yesterday a GM appeared next to a group of us while we were hunting (we have no idea why…) and just started chatting with us.Â  Some of the conversation can be seen in the screenshots below: 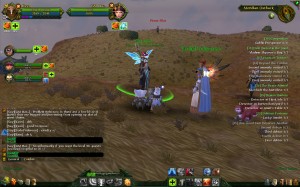 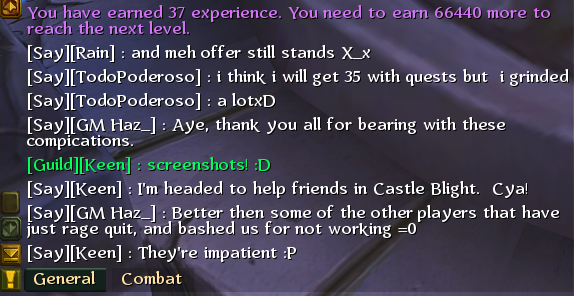 The GM said that they have been trying to release a patch but they’ve been met with some complications and they’ll get it out asap.Â  This felt like a real tester moment for me.Â  Actually talking with GM’s during a beta test in person is a fun process.Â  Even though it doesn’t actually mean much, feeling involved like this does give me the sense of involvement in the process beyond just posting on message boards or leaving feedback.Â  It reminds me of the days of Alpha testing The Realm and older games when the testing participation involved writing reports and doing things similar to the QA and actual in-house testing teams.Â Â  Felt good.Â  (LoL at the rage quit comment, btw)

Bugs are also a big problem.Â  It’s not just a lack of exp in Coba.Â  Many quests are actually broken.Â  The anomaly quest, the quest to find the 3 defectors, the quest to kill Goblin troopers, and more.Â  The bugs are weird.Â  Some quests like the goblin troopers are broken for everyone since the goblin troopers do not exist in the entire zone.Â  Some quests are broken for some and not for others like the anomaly quests which chooses randomly which anomalies work for some people and not for others.Â Â  This just compounds the issue of having to grind when quests that are appearing are bugged.

Since I’ve now had to grind almost two+ entire levels I feel it important to note something.Â  Grinding isn’t as bad as it sounds if you do it with fatigue.Â  For all the complaining everyone has done that killing mobs nets such slow exp, how have we been able to level in our 30’s by grinding?Â  The reality of the situation is that it’s actually faster leveling by grinding in Allods than it is by questing and doing content in others.Â  In a matter of just a couple hours of grinding I can pull out 50% of a level.Â  In the last 10 levels of a game that’s actually not too bad.Â  It’s nowhere near as fun as questing and I do not condone it, but the facts can’t be denied here:Â  It’s nowhere near as slow as games like Aion.Â  (This coming from a slow killing class, btw).

The next bit of feedback that I want to leave has to deal with the zone itself.Â  Coba Plateu looks great.Â  When I first entered the zone I was overjoyed to see a sort of desert safari wasteland.Â  It has great atmosphere and the mobs that populate it, like Rhinos, Tigers, Horses, Ogres, Goblins, etc., are all fantastic.Â  The problem is with the layout.Â  The zone is split in two by a wall erected by goblins — I think it’s called the Cordon?Â  Getting past this wall is a pita because there are only a few entrances.Â  Once on the other side, all the mobs hit like trucks.Â  I was killed in a matter of just a few hits by almost everything on the eastern side.Â  Yes, my gear sucked(s) at level 34 which hurts badly but these mobs were especially cruel.Â  The quests that we did obtain sent us double backing every other quest and going back to places we had gone and killing bosses we had killed three times for three different quests.Â  Getting killed on the eastern side meant 15+ minutes of wasted time.Â  Add in bugs and this zone ended up being the worst experience I’ve had in the game yet.Â  Oh well, it’s testing in a beta phase and I can accept that.Â  Note though that the Russians had these problems too and theirs was patched.Â  Why are we retesting content that has already been fixed?

Now that I have left (even with a few quests left) Coba, I am in Coldberg and ready to continue questing in hopefully what pans out to be a zone that isn’t bugged.Â  Amidst all my problems, I am still enjoying the game and I’m ready to begin the final leg of my journey to the level cap.

I’d like to add to the end here that the GM also told us that Astral Ships would be made more readily available to testers instead of having to go through the building and financing process.Â  This is good news!