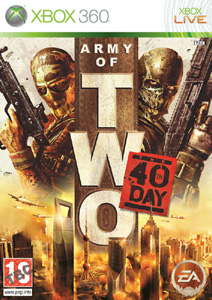 Being the sequel to one of my all time favorite console games is a blessing and a curse.Â  On one hand I’m already excited about the game and know that I like the general idea, and on the other hand I’m expecting it to be as good as or live up to its predecessor.Â Â  We finished playing through the Campaign on Contractor (the hardest difficult) yesterday with mixed feelings.Â  Army of Two had a great story that was driving the game the whole way through.Â  The original established these two characters as best friends and gave us an understanding of why we are doing the things the game is having us do.Â  The 40th Day, however, goes in a different direction.

It appears to be all about the choices you make this time around.Â  As you progress through the levels, Rios and Salem are presented with scenarios where they can save hostages, kill hostages, or simply be indifferent and just go in guns blazing.Â  You’re also presented with opportunities to kill enemies or simply restrain them.Â  These choices give you +/- morality and have consequences — many are played out in comic book-like cutscenes to show what happens in the future.Â  Choosing to save someone might mean they give you access to their weapons locker or it may mean that you give up weapons in order to save them.Â  These choices you make are presented on-screen in the form of “press A to tie down or B to shoot” or in some cases simply by your actions. Â  Keeping with choices, Rios and Salem have a friendship status to watch.Â  Shooting your buddy too many times or being stingy with the nugs might spell disaster for you at the end of the game when you’re wanting certain achievements.

The actual gameplay in The 40th Day does not disappoint.Â  Guns feel great and can be customized with all the great Army of Two goodies like better scopes and mixed parts.Â  There are plenty of opportunities to play with the aggro mechanics and utilize the new HUD inside the masks for target marking.Â  Temporary weapons picked up from the dead, a new cover mechanic, and decent AI make the game feel natural. Â  We would have liked to see more back-to-back, coop snipe, partner moves, and other coop elements though.Â  Throughout the game you’ll encounter several amazing stand-offs and big gun fights but the game lacks the degree of cooperative play that made the original so unique among the competition.

Storytelling is what really dragged the game down a few pegs for us.Â  It was never quite clear what was going on.Â  You start the game in China on what seems to be a standard mission given to your private military contracting company (TWO).Â  Suddenly the city starts to explode all around you.Â  Uhh..how did that happen? Surely planting two beacons couldn’t hvae done all of that.Â  Something much bigger is going on.Â  Ultimately you’ll piece together that another PMC is wreaking havoc on the city and there’s some big master mind behind it all.Â  I’d warn you about spoilers but this doesn’t really spoil anything at all… it’s really that generic.Â  Ultimately it appears that the developers wanted this to be more about what happens to two people trying to survive in a situation like this and the choices they make rather than giving you a fleshed our narrative.Â  Toss in the ending, which has been extremely controversial among fans, and you’re sure to walk away muttering “WTF was that about…”

The atmosphere in the game changed a great deal in this sequel.Â  The original was very lighthearted and full of comic appeal.Â  Salem and Rios did a lot more talking in the original and would hassle each other more.Â  The 40th Day has taken a much more serious tone. The banter and sarcasm that filled the first game is missing almost entirely.Â Â  There are still a few great moments such as Rios mentioning a time he violated a panda, but we miss having those moments multiple times in every level.

Army of Two: The 40th Day may not have advanced the story at all but it’s still the same Army of Two goodness (minus a few needed coop moments and humor).Â  You’ll spend tons of time customizing your guns, shooting bad guys in a game that has nailed the gun fighting mechanics, and enjoying a game that still does coop better than anyone else.

We give Army of Two: The 40th Day a 3.5 out of 5.
The level of storytelling and coop mechanics were simply not on par with its predecessor and these things greatly overshadowed any minor improvements made to the gameplay.

To view our scoring system please visit our reviews page.