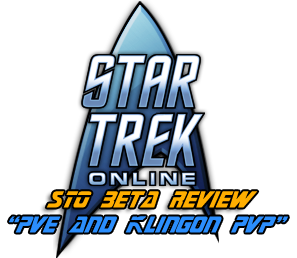 I’ve been able to play the game for several more days now and explore a good amount into the PvE and PvP gameplay.Â  My Federation Captain is now up to level 7 and I’ve been able to max out several of the sections under the skill trees.Â  These have unlocked an ability or two but for the most part have left me feeling the same as I did before maxing them.Â Â  Graev and I have done the majority of our leveling and PvE in a duo but brought in our friend as a third last night to do some of the quests.Â  We noticed that adding a third person drastically increased the difficulty of a mission that we had attempted the previous day.Â  This leads us to believe that missions scale in difficulty — a nice feature.

Several of the missions we have done have been bugged.Â  The Orion sector exploration quest has been especially bugged in that it does not give credit for completing various systems.Â  Sometimes you’ll go through the entire map, finish it, get a message that you completed it, but then have it uncompleted in your log.Â Â  When the missions can take 30 minutes just for one objective out of 6 it gets aggravating to have to redo it.

Both Graev and I really enjoy the PvE.Â  We’ve agreed that it’s enjoyable simply because it’s Star Trek.Â  If this were anything else we would probably have uninstalled already.Â  Why?Â  It’s really repetitive.Â  Whether you’re going to explore anomalies, nebulas, kill klingons, or scouting something it’s all the same.Â  You warp in, pew pew a few ships, scan something, warp out.Â  The objectives may read differently, but 90% of the content I’ve done has all mushed together in my head as nothing more than really fun ship combat.

The other 10% of content that hasn’t been forgettable is a particular story arch we’ve been working on.Â  The “Undine” aka Species 8472 (from Voyager) have been up to no good.Â  Weaving the Klingons into the story and a couple big battles and ground missions and the story is enough to make it memorable.Â  When the identity of the Undine was revealed we both went “Woah!” and suddenly we were interested in what was going on because we already had a prior knowledge of this race being extremely dangerous and bad news.Â  Without such appreciation, perhaps this mission would have been like all the rest.

At level 6 the ability to make a Klingon character unlocked.Â  I made a Klingon female that would give Lursa and Betor a run for their money, heh heh.Â  Exploring Qo’nos amounted to exploring a couple rooms in a building. :(Â  I was really hoping for a lot more out of the infamous Klingon Home World.Â  My character is awesome though.Â  She’s leveling very quickly and I’ve already been able to participate in many PvP battles.Â  My Bird of Prey is very maneuverable and with a little skill left over from my PotBS days I’ve been able to stay behind my enemy and take advantage of the forward disrupters + torps.

PvP in general though is a let down.Â  While I may enjoy the ship combat mechanics of the fights (as I do in PvE), the execution is off.Â  Klingon content really is just clicking a button on the hud to choose a game mode and queue.Â  Once your queue pops you warp in and participate.Â  Klingon Sector Space is a cleverly disguised version of the exact same screen that pops up when you want to queue.Â  It’s just a bunch of sectors you can fly to in order to queue instead of just clicking them on the menu.Â  Once you’re inside these battles (aka arenas or battlegrounds) it’s fairly sloppy and rushed..Â  Maybe it’s too many ships at once or ships do not live long enough, but a few people focus firing can destroy anyone in a matter of seconds.Â  Everything is chaotic and feels thrown together without the cohesiveness and strategy you would come to expect from such a capable combat system.

Now that I have experienced it for myself, I have something I want to say to some people:Â  Shame on you for lying or speaking out of ignorance about this not being Monster Play.Â  Klingons are almost identical in every way to Lord of the Rings Online’s Monster Play.Â  In both Klingon and Monster play you get a character who can advance in skills, participate in PvE and a very limited form of PvE, and essentially exist for no other purpose than to PvP against the fleshed out and complete “Federation” or “Free Peoples”.Â Â  Assuming it was the intention all along to make them nothing more than Monster play, it’s not a bad implementation.Â  It does work in this sense.Â  PvP gameplay being horrible is the biggest problem facing Klingon Play.Â  A failure to live up to potential though is another story but one we can set aside.

One thought sticks out more than any other in STO:Â  How long can I continue playing when it feels so repetitive and rushed?Â  I’d like to see the missions vary a great deal more.Â  Perhaps they change later on; I half expect this.Â  They still feel too repetitive right now.Â  There’s also a lot more that can be done with PvP to make it feel less thrown together like polishing up the objectives and looking into the mechanics of PvP ship combat against players.Â Â  Long-term appeal is going to be very questionable.