Leveling in this zone is what cemented my desire to play at launch.Â  Lightwood was a solid question location from 6-10, but it was the first area and I wasn’t sure how connected it all felt.Â  Several times I wandered around without a direction.Â  Siveria really changed that for me.Â  A story runs throughout this zone fueled by the stories interwoven throughout the game by the World Mysteries.

The content is also well done.Â  QuestingÂ  is familiar but not repetitive.Â  There is a balance of killing, looking, delivering, interacting, and other forms of quest-to-level content.Â  It didn’t stop.Â  I think thats a key component in Allods.Â  I don’t feel rushed and I don’t feel lost once reaching Siveria.Â  It’s a linear game, but within the linearity there is this sense of purpose that weaves you throughout the areas so that you don’t feel too much like you’re going in a straight line.

Siveria introduces the first desire for me to max rep with the faction of the region.Â  The Molotovka rep starts in the first quest hub you go to and continues for your entire stay (up to about level 18).Â  To gain rep, enough for maxing out, you’ll need to do some repeatable quests.Â  Most people choose to repeat the tiger charm quest, but this can be tough if the area is crowded.Â  Obtaining these rewards by level 15 is helpful because you’re going to start wanting your stats boosted up.Â  Rings and hats at level 15 are a huge boost and will make you feel incredibly powerful for a least a little while.

Just north of Siveria, this zone is comprised of several little allods (islands).Â  Like the northern area of Siveria, most of Frozen Frontier is in a white out blizzard and very cold.Â  So cold in fact that you get a debuff on some of the allods that damages you over time.Â  You either have a HoT buff like mine or you use the elixirs gained by questing to counteract the effect.Â  In this zone you’ll be questing for the Gibberlings.Â  The quests here felt a little more “Kill x of this” or “Bring me X of these from those”, but they’re fun and deliver a very nice story.

Traveling between the Allods is done in these magical bubbles that act like automated flight points.Â  You’ll be doing a lot of traveling in this zone between them which does eat up some time.Â  Staying organized and doing all the quests on an allod that you can before going to another or heading back to turn in quests is ideal.

Frozen Frontier offers the first opportunity that I’ve seen to kill mobs for rep.Â  The Gibberlings are trying to survive out in this frigid wasteland and they’ve made several enemies such as Harpies, Werebears, Trolls, and even Dragons.Â  Killing mobs and doing repeatable quests will give you experience and reputation.Â  I found myself picking up the repeatable rep quest every time I went back to the quest hub.Â  Reaching max rep with the Gibberlings was much quicker and more natural than the Molotovka’s.

It felt like several big developments in the story took place in this zone and while I wasn’t here for very long, the area upgraded several pieces of my gear and gave me a great sense of completion for my snowy adventures.

After questing in two frozen wastelands, this forest, even a dark and scary one, is a welcome sight.Â Â  Darkwater is the next step I made in my questing adventure.Â  This zone is home to the Kanians (Humans) and yet another rich story arch which you should be able to pick up on from the screenshots.Â  The town outside Castle Blight is troubled by ghosts and all sorts of problems that revolve around a story that I have only begun to unfold.

This zone has lots of bandits and evil possessed creatures.Â  Thus far I have doing quests from only one of the quest hubs, but I have already explored half the zone doing them.Â  There is an enormous ‘World tree’ type thing near the southern part of the zone where Elves has set up a base.Â  Darkwater has a teleport node to Tenebra which is the home of the Elves.

Now that I am level 20 I can not progress any more this beta phase.Â  I’m not going to work on any more quests until the next phase because I want this to feel like a natural progression.

Once the next phase begins I will be looking for groups to run the Castle dungeon as well as the two outdoor raid bosses I’ve come across in quests.Â Â  I’m expecting Darkwater to last me until about 23.Â  I already have several quests wanting to send me to Tenebra, but I’ve heard that Holy Lands are where you level at 23.Â  Perhaps Tenebra is higher level or maybe Darkwater ends sooner than I think.Â  Either way, I’m excited.Â  Each zone has been more enjoyable than the last and the game is continuing to get more fun every time I level up.Â Â  I will bring you guys my continued adventures at the start of the next beta phase. 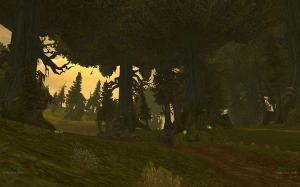 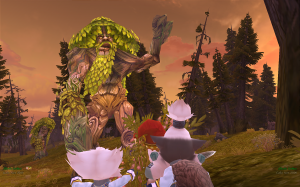