I’ve heard pretty much nothing about this game, aside from seeing it’s name pop-up here and there on a few news sites I frequent, and initially wrote it off as some obscure indie PC title that most likely wasn’t worth my time or money. However, after doing some research I discovered the game might be more interesting than I thought. Usually I would try to read reviews but there didn’t really seem to be many for Torchlight. After some internal debate I finally decided just to buy it. I mean, it’s only $20, right? Well, it turns out that this is one of the best $20 purchases I have ever made.

I’ve only played for a few hours but I’m already hooked. The game plays like a spiritual successor to Diablo, which makes sense considering who made it. I really like how they incorporated a skill tree and learnable spells. Almost like they took the systems from Diablo and Diablo II and combined them. Another cool thing is giving you a pet to start with, the neatest feature being its ability to take loot to town and sell it while you continue adventuring. How awesome is that? Not only is the game fun, but it looks great. The art style seems similar to WCIII/WoW. Some might not appreciate it, but I dig it. Especially since it runs extremely well on my dated laptop.

From what I have seen thus far I highly recommend Torchlight.

Anyways, I need to get back to scouring dungeons. I’ll try to poke my head up later for more impressions. 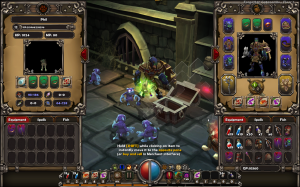 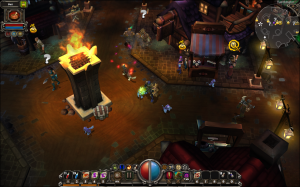