I’ve been asked to talk about the GC 2009 Walkthrough of Star Wars: The Old Republic from a few readers. This walkthrough was provided by the official SWTOR team and, for some reason, hasn’t been available on SWTOR.com but available on IGN instead. The walkthrough is split into 4 parts, so be sure to watch parts 2, 3, and 4 after the part 1 below.Â  Feels like there are a lot of videos to link you guys these days and I don’t want to overwhelm you with them on the front page, so you can view it after the jump. 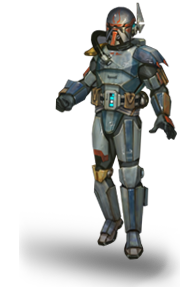 I’m very impressed with the quality of gameplay being shown.Â  I’ll start off by talking about the combat and then go onto more analytical commentary.

Watching the Bounty Hunter fight sent me back a few years to SWG (pre-NGE) when you would stand off against humanoids firing blasters.Â  It was a little awkward at first to watch the BH just stand there exchanging fire, but not entirely ‘unrealistic’ since Bobba and Jango just stood around like a bad-ass all armored in their Mandelorian armor.Â  I like how there’s more to it than just exchanging blaster fire.Â  Listening to the developers talk about the BH flying up and raining down fire on his enemies sounds promising.Â  The flame thrower and wrist rockets along with other gadgets like the charges and darts will likely accompany several other gadgets to make the BH a true Star Wars BH experience.

The Sith Warrior… wow.Â  His combat is animations are better than I expected to see in a MMORPG.Â  Albeit it’s not The Force Unleashed, the Light Saber use is great.Â  Reflecting lasers, thrusts, flourishes, clashing with other sabers, and what you would expect from a Light Saber being used by a Sith(or Jedi) seems to be all there at a level beyond what we can fairly expect to see in a game like this.Â  Force powers are also well done.Â  The force choke and shockwave(what’s that called?) had the appropriate “oomph” and the Force Charge was one of the cooler abilities in a MMO yet.Â  It was as fluid as can be expected.

Smuggler combat was hokey at parts with the gumbi-man placeholders for positional moves.Â  I think it looked a lot better than the Bounty Hunter though.Â  If I had to guess what class that character is without ever knowing anything about it I would have said “Han Solo”, so they accomplished their goal of having the Smuggler fit that role.Â  I hope that Smugglers get a lot more than groin kicks and Kirk rolls though.Â  I want them to be the type of people that will hang out in Mos Eisley.Â  SWG, while not capturing much of the character of a Smuggler, at least captured the necessity of them in the community (even if it was only in a very small way).Â  Looking forward to seeing more of their combat later.

The graphics in general seem to keep with the direction Star Wars has gone lately with the cartoon on Cartoon Network.Â  It’s the popular stylized realism format – the only format that would have worked with a Star Wars MMO, imo.Â  The general “look” can’t be scrutinized by me.Â Â  Considering the scope of the Star Wars galaxy, I think we’re in for a real treat in the environments.Â  The Hutta palace better be more than a backdrop illusion.Â  I want to go there.Â  I want to see and feel the depth of my environment and be enveloped in the majesty of it all.Â  The game will lose big points with me if I’m trapped and prevented from striking out and seeing the sights.

In terms of instancing, let’s face it:Â  Everything we saw in these videos looks instanced.Â  Everything shown felt like it was meant directly for that solo BH or the group.Â  That doesn’t detract from how amazing it all looked and the quality of the play, but it detracts from the “massively multiplayer” part of the game – a part that made SWG really shine – which I really feel is necessary to capture how personable the “community” is to the experience — a ‘true’ Star Wars online experience.

The conversation mechanics are really important to how this game will accomplish its goal of being story-driven.Â  It felt like I was watching a movie during the conversation and it flowed (albeit not entirely without some rough edges) nicely with who was present in the group and the responses they chose to make.Â  I think if it’s handled correctly, this type of dialog can provide a cinematic feel to the game that will impress the story upon the player regardless of whether or not the player cares or even wants to know about the story.Â Â  I’m expecting my character to live the story of The Old Republic, and as a result I will live it too.

Keeping the game true to MMORPG form pleases me.Â  The hotbar, the combat log, the UI, and how it flows are traditional in their appearance.Â  Thus far, in the MMORPG genre, story has been delivered in bursts and filler has been the traditional act of leveling up and developing your character’s abilities.Â  Let’s use LOTRO as an example.Â  In LOTRO you start off with a lot of story, but then you’re sent off to level up a bit before you continue.Â  During this interim period you’re free to explore, kill bears, socialize with other players, quest, dungeon crawl, collect things, farm, and do the usual things we do in these types of games.Â  How will SWTOR handle this?Â  Will it be a constant flow of these cinematic-type experiences or will we be set loose to do our own thing at our own leisure?Â  Therein lies the true crux of our understanding how SWTOR is being designed.Â  If we’re constantly being fed off in a new direction to experience story content, then we’ll be playing Guild Wars or KOTOR, and not a proper MMORPG.Â  I hope they handle it how LOTRO handles their story quests.

This walkthrough doesn’t have me more excited than I already was, it just confirms how awesome this game will be.Â  Even if it’s a highly instanced and personal experience, rather than a MMORPG, it’s going to be a lot of fun.Â  Admittedly, most of that inherent enjoyment will come from being a life-long Star Wars fan.Â  If you know about Hutta already, you’re going to bring an existing part of you to that place, and that is a powerful tool at Bioware’s disposal: to be able to bring to life something players already cherish.Â Â  I expect SWTOR to play well enough to be standalone, but I do not doubt how much more enjoyment Star Wars fans will get out of this game.