The 3rd Video Documentary is simply amazing. It shows the UI, Lightsaber combat, landscape, the scope of level design, and an immense (if not overkill) emphasis on the voice acting. Nothing being highlighted in the video, or explained in the video, has me worried. In fact, I’m now exponentially more excited for the game to come out. I’m already preparing to lose any life outside the walls of my gaming room that I thought I had and I’m beginning to stockpile sodas and salty snacks. However, I’m starting to feel more uneasy about what the videos and releases are not focusing on – something that could ruin the game for me altogether.

Looking at that level of exclusivity provided to the player, how can we not expect SWTOR to be massively instanced? The characters speaking appeared to be exclusive to the player and his party. The level we were shown appears to be tailored specifically for the party involved. Everything in this video looks like it would work out instanced far better than it would open-world. Anyone disagree? I don’t see how you possibly can, but I am eager to feel at ease.

I can understand the use of some instancing for parts of the game. Instancing is used to tell a better story than we can experience elsewhere. Yet at the same time, over use of this instancing technique can destroy any sense of contiguity in the world. I call them: MIMORPG’s, or Massively Instanced Multiplayer Online Role-Playing Games. They want us to feel like we’re playing this massively multiplayer game, when in reality we’re playing a smaller multiplayer game with a larger sample of people to play with via a lobby (space port/city/etc).

Questions, I have. Will we be able to walk outside outposts and begin hunting or will we have to take a ship to an instance to fight? Will there be any feeling of connection between locations in the world or will we fast travel to them like WAR? Will the content be exclusive or open to everyone at the same time?

Look at the screenshots below taken from Video Documentary #3. 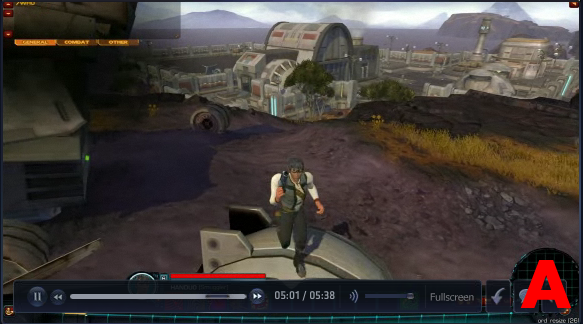 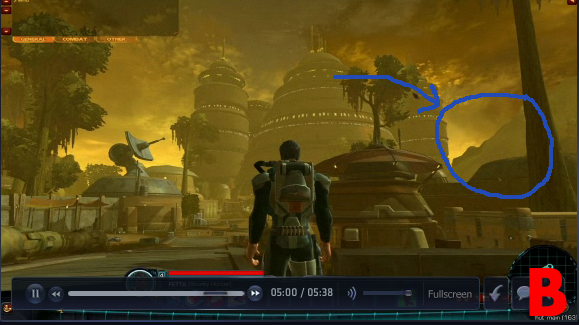 In screenshot A, we see a character on a cliff overlooking an outpost. Assume for a minute that this outpost is where I arrived on the planet or where I was just recently visiting. Assuming other players not in my party were there with me, will they be able to walk outside of that port and begin exploring and hunting with me or am I alone out here because this is my own little mission?

In screenshot B, look at the world around. What are the barriers? Can I explore beyond that hill I circled or is this a pre-scripted mission for me to follow where I’m stuck on rails? Can I set off in one direction and explore or am I confined by the world and mechanics? Will I see other players doing their thing out in the world?

I want this to feel like “an immersive, living, breathing, environment that players have never seen before”, but that will not happen for me if this is one big chopped up and instanced world.