The capital cities in this game just rock.Â  They’re gorgeous, huge, useful, and oh yeah they’re gorgeous.Â  I was blown away by Sanctum (Elyos) and I thought that nothing could match it, but Pandaemonium definitely does.Â  Sanctum was full of that magical feeling… felt like Disney Land actually… anyway, it was glorious.Â  Pandaemonium has a feeling that I would best describe as ‘grand’, and I’ll toss in a few words like ‘scope’ and ‘magnificent’. The cities are alive and they feel lived in by the shop keepers and the npcs. The number of players running around the streets added to the ‘world’ feeling. The ambiance being created here is top notch and I haven’t felt the desire to sit in a tavern and socialize like this since SWG.

Words do not do it justice, so I’ll just leave it to the video.Â  What I do want to talk a bit on though is crafting.Â  In the video you’ll see the crafting stations which all have that… again with the Disney… magical feel to them.Â  The loom is going on its own, potions in the air are mixing, the cooking station is going, and the forge is active.Â  I wouldn’t say that the crafting areas in the game are leaps and bounds beyond anything we’ve seen (because they’re not), but they’re nifty.Â  I spent about thirty minutes raising my armor crafting through work orders and smelting the iron that I gathered.Â Â Â  Everyone should craft in this game – everyone.

Yeah, I’m really taken with the city and the graphics and environment of Aion. It is absolutely deserved.

Before you watch the video, here are a few screenshots that show off the beauty of Aion: 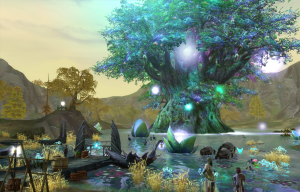