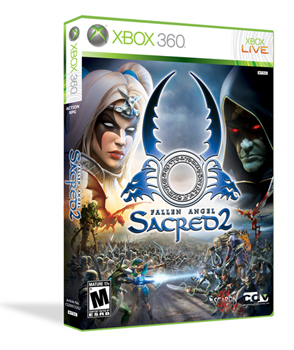 Sacred 2 is an action RPG not too dissimilar from games such as Diablo 2, Titan Quest, and Baldur’s Gate: Dark Alliance.Â  We had the opportunity to play and review the console port (on Xbox 360) of what was originally a PC game.Â  For those of you unfamiliar with the genre the basic elements of gameplay revolve around exploring, questing, finding equipment and character development.

At the beginning of the game you get to choose between one of six classes: Seraphim, Shadow Warrior, High Elf, Dryad, Temple Guardian, and Inquisitor.Â  After choosing your class, you get to choose between playing a Light campaign or Shadow campaign – basically good or evil and restricted by class for the Inquisitor(evil) and Seraphim(good).Â  Each class starts off in the campaign at a different location with a different class quest.Â  This means that you can play through multiple times from different perspectives.

Sacred 2’s core game mechanics can be really confusing at first.Â  Usually in these types of games you’ll find skill trees, but in this game each character has three different “aspects” which each contain five abilities.Â  These abilities within the aspects can be spells, buffs, melee attacks, etc.Â  In order to make these abilities better, you have to find, or trade for, and memorize runes to increase its rank.Â  The tradeoff is that the more you raise the rank of an ability, the longer the cooldown.Â  Every level your character gains skill-points which can be used to ‘specialize’ in a particular aspect, thus reducing this increased cooldown.Â  So the player has a bit of room to customize how he wants to play his character and whether or not he’ll choose to focus on one aspect or spread his abilities out and simply need to manage cooldowns.Â  Aside from specializing in aspects, skill points can also be used to raise armor proficiency, riding skill (yes, there are mounts), crafting skills, and more.

No matter which character you choose, you’ll basically start out with no gear and only one ability.Â  Every class will eventually find their way to the first starting town where the meat of the game really begins.Â  The game world is really quite large and nothing stops you from exploring and finding many of the side quests and dungeons.Â  If you’re not willing to sidetrack much then you can always go straight through by just playing the main story.Â  However, we chose to really dig in and explore the side quests of which there are literally hundreds.Â  They mostly break down into the following categories:Â  escorts, kill x of something, collect x of something, or locate something.Â  While not terribly interesting, they do offer good experience, content, and a reason to explore and see the world.Â  And again, these quests are literally all over the world and you will reach a point where you have to stop taking them because your quest log is packed.

Since the world is so big, your character will get to set his or her bindpoint to a location that you can warp back to in addition to the warp gates that you activate while adventuring.Â  This, along with mounts, make traversing the game world easy and less tedious than other RPGs and especially accommodating since mobs respawn in Sacred 2 when you get more than 20 or so feet from their spawn location.Â Â  This also creates the true sense of a world that you’re involved with instead of just linear progression.

Like most hack and slash RPGs, you’re going to be wading through hundreds and thousands of monsters and finding hundreds of different pieces of loot as you work through the content.Â  There is plenty of item diversity in Sacred 2.Â  While playing even in the early levels it never felt like we found the same item twice.Â  Loot can also drop for classes that you are not playing, although this felt more uncommon and not necessarily a bad thing given that you can use the in-game bank to transfer items between characters on your gamer profile.Â  Enchanting gear, crafting, and more make Sacred 2’s itemization up to par with other games in the genre.

The multiplayer is feature rich in Sacred 2 offering both PvP and cooperative play.Â  Although we did not try the true online multiplayer, we did play coop with multiple profiles.Â  This multiplayer mode had some issues though.Â  As soon as the second player pops into the game the camera zooms out and becomes nearly unmanipulatable.Â  Losing this camera control does kill the ability to enjoy the game’s scenery and instead becomes more about the gameplay and less about the immersion. Coop between profiles also lacked one very, very important feature:Â  Trading!!Â  This feature is supposedly being patched in soon (perhaps already) but while we played it was a true hindrance when an item dropped and it was picked up by the wrong player.Â Â  Multiplayer online is doable but only if both profiles have Gold Membership.

For the most part, Sacred 2 works on a console but throughout playing the game you can’t help but get the sense that it was originally designed to be played on a computer.Â  Menu management, for example, can be very confusing and cumbersome.Â  Trying to target enemies and attack them feels like it has an additional step of acquiring a target based on direction – one that is likely due to not having a mouse to hover over enemies.Â  Lack of hotkey functionality is also present and apparent since your character can learn over fifteen abilities while you can only hotkey approximately eleven of them.Â  Despite these obvious and all-too-common port flaws, character movement feels great and the combat is easy to get used to.

The visuals in Sacred 2 look good on our HD TV.Â  There are a few hiccups here and there in the form of screen tearing and framerate issues, but nothing too distracting.Â  There are load times which are not seamless, such as entering one of the first main towns, but installing it to your hard drive alleviates some of the loading and even some of the graphical hiccups.Â  Overall, we never felt ourselves bothered by the performance and certainly never by the graphics (which are pretty good).

A lot of people consider the console version of Sacred 2 to be a bad PC port, but we think it’s actually pretty good.Â  Sure, some things could have been done better but when consoles are sorely lacking hack and slash RPGs lately you can’t nitpick the details.Â  With a large game world, 2 full campaigns, 6 classes, and over 600 quests this is a solid RPG that you can enjoy for quite a while as we certainly have.

Does this sound like something you would like to play?Â  Check back soon to find out how you can win a copy of the Xbox 360 version of Sacred 2 from Keen and Graev’s Gaming Blog!