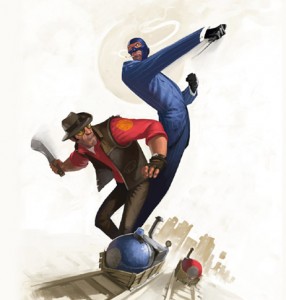 The Sniper vs. Spy update for Valve’s Team Fortress 2 went live two days ago.Â  The anticipation building up to this patch has been rather huge in the community because of all the changes being brought to the game.Â  Valve’s ongoing commitment to introducing new content for each of the classes is unmatched in the FPS genre and to have two classes receive their update at once is huge.Â  On top of the class update, new hats now drop for all classes and many classes received additional tweaks on top of fixes and changes brought to the game in general.Â  And if all of that wasn’t enough, new maps were introduced.

Ideally this would have been an amazing patch.Â  However, Valve made a rather large change to how items are unlocked.Â  Items themselves are the content and now they are found randomly just like purple or “epic” items would be found in games like World of Warcraft.Â  They’re random and lucky drops now instead of being unlocked via achievements.Â  I can understand why Valve wanted to make the change because achievement servers were rather silly and destroyed the spirit of the game, but this new way is full of confusing and frustrating elements.

I played for six hours yesterday and was on top of the score board many times.Â  I played multiple classes and even stayed as one class for several hours back to back.Â  In total over the past two days I have unlocked 4 items:Â  Sandvich, Force of Nature, Force of Nature, and Flare gun.Â  Yep, that’s two Force of Natures.Â  I already owned all of these weapons.Â  I played the game more than I normally would and all that I have to show for it are redundant items in my new “bag”.

The way items drop aren’t just from killing people either.Â  Apparently spectators can find them, afkers who just sit there can find them (which has introduced “Idle item farm” servers), and supposedly this is all based on some ‘time spent playing’ algorithm that gives you a chance at a random item.Â  So if the equations don’t work out in your favor then you could play all day legit and get nothing or get something you already unlocked.

Talking this over with other people (and complaining about it mostly), everyone is in agreement that Valve’s heart was in the right place.Â  They’ve brought the system closer to be about rewarding the player for simply playing the game.Â  That’s fantastic.Â  But why the random items instead of ones that you don’t have and why not allow players to get them by killing someone instead of by being killed or simply playing?Â  Adding “item trading” is silly because no one is going to trade their new sniper items for a Bonk! Soda.Â Â  The system can be fixed to work a whole lot better than it currently does.

Even though this new item dropping debacle has me disheartened, I really like the fixes, polish (I didn’t think it was possible for TF2 to get more polished), and new maps.Â  I think this is the first time that Valve has let me down and I don’t know how to react.Â Â  I’ve always considered them one of those companies that can do no wrong — a reputation they earned with me.Â  Let’s hope this can be resolved quickly.